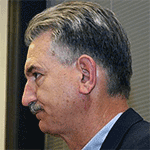 The owner of the Giordano's pizza chain has filed suit against its Evanston franchisee, claiming he's invested in the rival Leona's restaurant chain.

Chicago Business reports that the suit alleges that Ted Mavrakis bankrolled acquisition of Leona's Pizzeria Inc last year, plans to run it in violation of a non-compete agreement and switch his Giordano's locations in Evanston and Morton Grove to the Leona's brand.

Mavrakis denies the allegations, saying he has "nothing to do with Leona's," although he helped his niece finance her purchase of the chain.

The sides have agreed to binding arbitration to resolve the dispute. The parties are scheduled for a hearing in Circuit Court in April.