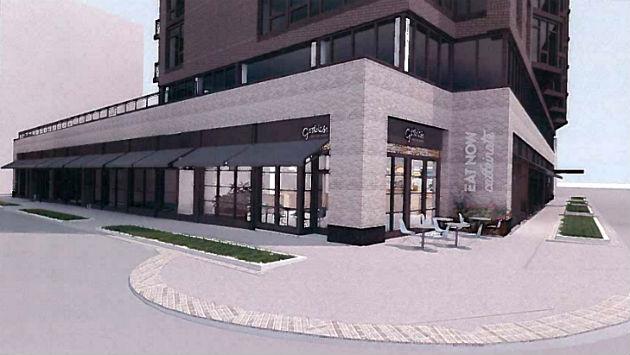 The Chicago-based Goddess and the Baker chain of sandwich, coffee and bakery shops will seek city approval Wednesday for its first location in Evanston.

The shop, planned for 534 Main St. in the corner storefront in the new 835 Chicago Ave. building, was first announced last August.

Plans for the special use permit for the shop go before the city's Design and Project Review Committee Wednesday, and then will require review by the Zoning Board of Appeals and final sign-off by the City Council.

Goddess and the Baker, launched by Debra Sharpe, has locations at 33 S. Wabash Ave. in the Loop and at 600 East Grand Ave. on Navy Pier. Sharpe also runs four related restaurants under the Goddess and the Grocer brand.

The planned Evanston location will have indoor seating for about 60 customers and a private patio for 16 more.

The restaurant plans to be open from 7 a.m. to 8 p.m. daily and serve breakfast, lunch and dinner — along with desserts all day.

Food for the Evanston location will be prepared off-site at the Goddess and the Grocer's commissary.

In other food news, the City Council Monday night approved sidewalk cafes for Smylie Brothers Brewing Company (which already has a cafe on its private patio) and for Panera Bread and Cupitol Coffee & Eatery.

Thai Sookdee at 1016 Church St. has decided to not renew its liquor license, but the aldermen gave final approval for liquor licenses for Terra and Vine, Cupitol Coffee and the banquet facility at the planned Museum of Time and Glass.

The City Council also gave final approval to an ordinance amendment dropping the city's ban on food trucks not associated with an Evanston bricks-and-mortar restaurant. That move is expected to lead to settlement of a long-running suit against the city by an out-of-town food truck owner.