The first six townhomes at the Church Street Village development on Evanston’s west side are rising out of the ground this week. 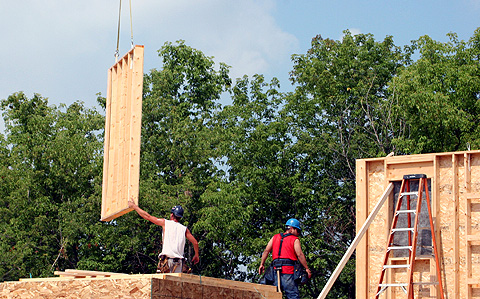 A worker guides a panel lifted by a crane into place on the second floor of a townhome.

Developers Walter Kihm and Ron Fleckman of Cyrus Homes say they hope to have at least the first floors of 12 of the planned 40 units at the development framed in by the end of the week.

Half the units in the first major development on the city’s west side in decades have been sold at prices under $220 per square foot.

The townhomes, at 1613 Church St. are being built on the site of the former Hines lumber yard.

The developers say they are continuing discussions with the city about their plans for another new construction project on the former Bishop Freeman factory site two blocks to the north.