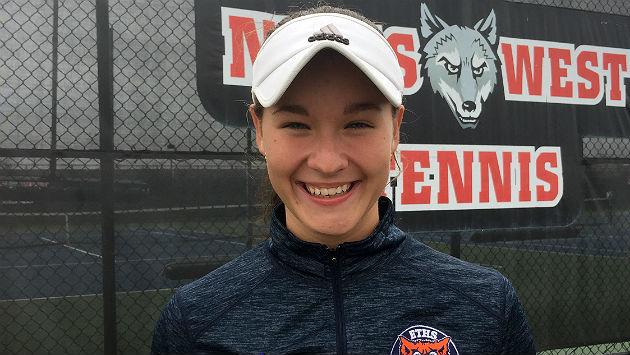 The ability to grind out points on the tennis courts has never really been Anastasia Goncharova’s forte.

The left-hander from Evanston has built a national ranking on her aggressive play and attempting winning shots for points whenever she sees an opportunity.

But if Saturday’s performance at the Class 2A Niles West Sectional tournament is any indication, it just might be that grinding it out and playing point by point brings out the best in the Evanston junior.

Goncharova avenged three previous losses to Bacalla this fall — two of them in Central Suburban League South division competition — and secured her first berth in the IHSA state finals with a gutsy 6-2, 0-6, 6-4 victory. She was the only Wildkit player to advance in either singles or doubles play and helped lift Evanston to a tie for second place in the team standings with Loyola Academy. New Trier ruled the team competition with 27 points.

In her first year of high school competition, Goncharova ended a 40-year drought for the program. She turned the tables on the top-seeded Bacalla following decisive losses to the Niles North standout in both dual meet action and in the finals of the league tournament. She’ll take a 16-3 overall record into next week’s IHSA finals.

“We never talked about winning. We talked about the little things, about moving your feet and staying fluid,” said Evanston coach Joyce Anderson following the historic win. “We did talk about changing her approach to grinding out more points. I knew Anastasia had this in her. She just had to play smart today.

The big thing for her was to take it one point at a time, stick with it and keep fighting.

“Even when she lost that second set, she didn’t let it get to her. She came back ready to go and confident in her shots.  I’m just so proud of her. It’s awesome as a coach when you see a player achieve what you know she can do. And I think she’s a better player when she’s willing to grind it out like she did today.”

“Winning a sectional for the first time is a very big honor, and now I get to keep on representing my high school again next week,” Goncharova said. “I’m still a little shocked, because it was a very close match and it could have gone either way. I knew I had to grind it out to be able to win today, and I just kept using all of the shots I had. I knew I could do it.

“I haven’t played my best tennis against her but I just had to stay confident today. I just came out relaxed and tried to play my game, and not be scared to execute shots. I just tried to play one point at a time.”

Both standouts had to deal with a steady (and chilly) breeze that affected serves and groundstrokes. Bacalla, in particular, had difficulty keeping her first serves in play in both the first and third sets.

“I thought the wind played a big role in the match,” Goncharova said. “I love using the wind to my advantage whenever I can, and I was more confident about hitting the ball out and I wasn’t guiding the ball like she was at times.

“Even when I was up 3-1 (in the final set) I knew it could go either way. But at 5-3, even though she won that game, I knew I was playing well and I had confidence in my serve (for the next game). I knew I could do it then. I went for the same shot (at the net) in the second set and I missed it that time. I didn’t miss it this time.”

Goncharova’s passing shot for the game-winner built a 3-1 advantage and that was the beginning of the end for Bacalla, even though she rallied to tie things a 3-all. Goncharova prevailed in the next two games and didn’t take long to nail down the title after that.

“Even when I knew it could still go either way (in the decisive set), I was still proud of myself no matter how it ended,” added the ETHS junior. “I was proud because I overcame a mental block against her. When we played before, I couldn’t stay on the same level with her. Now, I can.”

Evanston’s other singles entry, Lola Knight, bowed to New Trier’s Ali Benedetto 6-2, 6-0 in the first round of the single elimination tourney.

In doubles, both Wildkit teams were eliminated by New Trier in the second round. The team of Margot Connor/Katherine Mann pushed New Trier’s Michelle Buyer and Natalie Kalter to three sets before the Trevians triumphed 6-1, 6-7 (5), 6-2, while Kiersa Berg and Kathryn Halverson of ETHS lost a 6-2, 6-0 decision to New Trier’s top seeded Michelle Capone and Amia Ross.