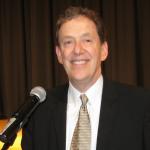 Evanston/Skokie District 65 superintendent candidate Paul Goren emphasized his local roots as a District 65 parent and his work in Chicago and nationwide on critical educational and political issues in his appearance at a public forum Wednesday night.

Goren grew up on Chicago’s South Side and graduated from the Chicago public school system, yet he and his wife have lived in Evanston for 16 years and have seen their three children work their way through Oakton Elementary School, Chute Middle School, and Evanston Township High School.

On the regional and national scene, he was a teacher and administrator in schools in California, was deputy superintendent for policy and strategic services for the Minneapolis public schools, and served a stint as interim chief of the Chicago Public Schools Office of Strategy, Research, and Accountability and as executive director of the University of Chicago Consortium on Chicago School Research.

Also on the policy side, he spent four years as a director and a senior policy analyst in the Educational Policy Studies Division of the National Governors’ Association in Washington, D.C.

Currently he is senior vice president for program at CASEL: Collaborative for Academic, Social, and Emotional Learning in Chicago. He is also on the Advisory Board of Evanston’s Youth Organizations Umbrella, where he has been a board member for 12 years, and Foundation 65, which raises private funds for District 65 programs.

He told his audience in the auditorium of the King Lab magnet school that he brings to the table multiple perspectives as a parent, an educator, and a community member.

As with other candidates for the job, Goren said he supports the arts, is focused on reducing the achievement gap (“but not at the expense of the high achievers”), and is committed to providing opportunities for all kids to excel.

He recognizes that testing is a way of life in the evolving school environment, but he contends that much of the data that is collected is unusable. As superintendent, he said he would strive to make that plethora of data usable in terms of improving the educational product of the schools.

Goren is the third of five finalists for the job vacated when Hardy Murphy resigned as superintendent last August to appear this week in a public forum.

A fourth candidate will be heard tonight. He is Quintin Shepherd, superintendent of Skokie/Morton Grove District 69, which is a K-12 unit district.

In his application for the District 65 job, Shepherd says he took over a district with declining student achievement scores and perilous finances and has been successful at turning them around in a four-year period.

In his community work, Shepherd was named Rotarian of the Year in 2010, serves on the Community Council of Youth Organizations Umbrella, and has supported local business and civic organizations.