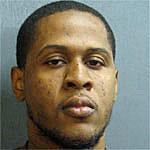 A grand jury will get to decide whether Evanston resident John Anthony Bamberg Junior goes to trial on firearms charges.

At a preliminary hearing today the prosecution opted to send the case, which stems from a police stop on Dodge Avenue on Feb. 23, to the grand jury.

Bamberg's attorney, David Olshansky, says he believes the evidence is weak against his client.

"My opinoin is that this is retribution by police for the case he had a year-and-a-half ago," Olshansky said.

In that case Bamberg was acquitted of first degree murder charges in the 2010 death of 23-year-old Marcus Davis, who was shot to death as he backed his car out of the lot at Smitty's Garage on Dodge Avenue.

Olshansky says Bamberg had moved to Georgia after the acquittal in that case and had only been back in Evanston for a couple of days before he was pulled over.

Bamberg was a back-seat passenger in the car, which was driven by Elizabeth Granbery, the mother of a two-year-old child fathered by Bamberg's brother Javar, who was shot to death in 2012.

Police also charged Granbery with failing to have her two-year-old daughter bucked into a car seat.