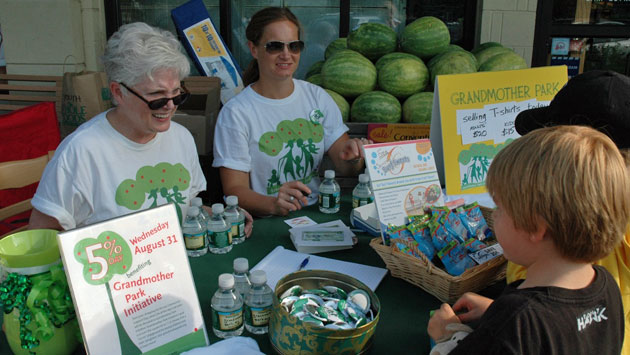 The Grandmother Park Initiative, a non-profit group working to develop a small park for toddlers and their families at 1125 Dewey Ave. is a little closer to its fundraising goal.

The group raised nearly $3,500 in a 5-percent day promotion at Whole Foods, in which the store contributed a portion of its sales proceeds for the day to the cause.

The plan for the pocket park was developed three years ago by Gay Riseborough and her friend Mary Trujillo who, after a walk through their West Evanston neighborhood, realized there was no play area for their grandchildren.

Riseborough created a poster for their summer block party in Evanston to gauge neighborhood interest, and the group grew from there.

The Grandmother Park Initiative partnered with Openlands, a nonprofit metropolitan conservation organization, who purchased the 32' x 166' property at 1125 Dewey and is holding the space for the group as they continue to raise money to purchase and develop the lot into a park.

Prior to purchase by Openlands, the lot contained a burnt out home that had gone into foreclosure. The building has since been demolished and is now an open space awaiting its transformation into a safe place where families and children can meet and learn through play.

To learn more about the Grandmother Park Initiative or to support their fundraising efforts, visit www.grandmotherpark.org or call 847-475-5159.