Parts of Evanston are going green, but not in the way the properties’ owners had hoped. 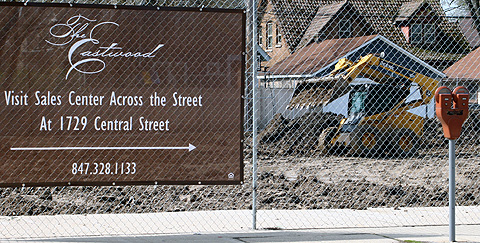 A worker prepares a construction site for planting grass.

With the nationwide slowdown in the housing industry, several major construction projects already approved in Evanston are acquiring new life as grassy fields rather than building sites.

Monday the City Council approved a two year delay in the deadline for starting construction on the 165-unit Carroll Place condo development at 1881 Oak Ave.

Developer Robert King blames the slowing economy for forcing a second delay in marketing the project.

After complaints from a neighbor, aldermen added a requirement that the developer hire a landscaping service to mow the grass weekly and a snow removal service to shovel the walks in the winter to its approval of the new postponement.

The vote was 7-2, with aldermen Melissa Wynne, 3rd Ward, and Edmund Moran, 6th Ward, voting against the extension. Both had opposed the original approval of the project in 2006.

Meanwhile, over the weekend, a bobcat operator was at work on the site of the planned 50-unit condo project at 1700 Central St., smoothing the ground in preparation for planting grass there as well.

In January developers of The Eastwood, on the former site of the Evanston Theater, had won council approval for a one year delay, until April 2009, to begin construction on the four-story, 51-unit project that is planned to also have 11,000 square feet of retail space.

At the time they’d said they still had hopes of beginning work this year, but Community Development Director James Wolinski said Monday he believes only two units have sold in the project so far, and that it now definitely won’t start construction in 2008. 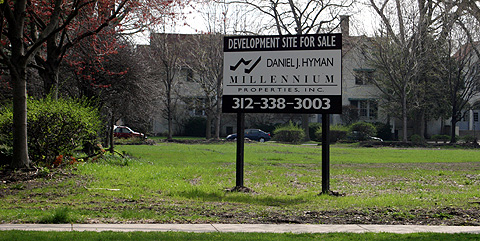 And the former Kendall College site, scene of a fierce multi-year battle between developer Smithfield Properties and neighbors over whether the college should be redeveloped with multi-unit housing or single family homes sits idle this spring.

The neighbors won the battle to have the site approved for single family homes, but the developer has decided to put the entire full-block tract up for sale to a new developer.