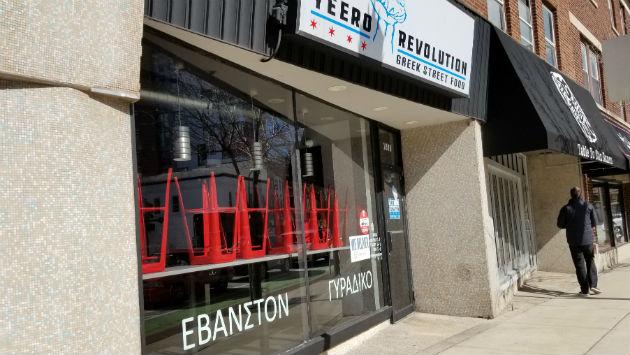 The Greek street-food restaurant Yeero Revolution at 1009 Davis St. in Evanston has closed.

Annie Coakley, executive director of Downtown Evanston, told residents at the 1st Ward meeting Tuesday night that the quick-serve restaurant, which had opened in November 2016, closed over the weekend.

But, on the plus side, Coakley said, with the opening of the Target store in Sherman Plaza this week, residents can once again buy underwear and socks downtown. Some folks have been complaining about that gap in the business district’s offerings since major department stores closed decades ago.

“We go to businesses that we believe would go very well here, including concepts like a cooking school or dance school, as well as entertainment uses.

“Retail is a tough, tough business now,” Coakley said, but “We’re working to hand pick retail that would do very well here” — focusing on concepts that are already working well elsewhere.

“Once the leaves are back on the trees, we’ll bring commercial real estate brokers from Chicago here for a tour, who might not have a great understanding of how wonderful Evanston is,” she added.

She also told residents at the meeting at the Evanston Public Library that Prairie Moon, a restaurant that will lose its existing site to construction of the Albion Residential development, has found a new home. “I can’t say where yet,” she teased, “but it’s close to where we’re sitting.”

Prairie Moon’s owner plans to also launch a new restaurant concept at the Albion site once construction there is completed.

Coakley said she’s looking for ideas from residents for events that could be held in the redesigned Fountain Square that’s scheduled to be completed this spring.

With Colectivo Coffee opening in the former Radio Shack space at Sherman Avenue and Church Street, Coakley said, it should be easy for folks to grab some coffee and walk down the block to the square.

She said Downtown Evanston is already planning to hold its Thursday Night Live music events there as well as yoga classes and a variety of lunchtime activities, “but there are a lot of opportunities to program that space.”