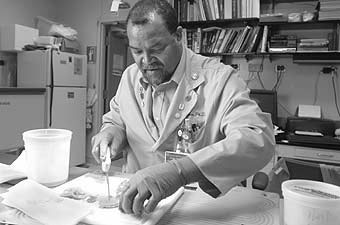 Greene retired last fall from Northwestern University, where he was a senior research technologist in cardiothoracic surgery at the Feinberg School of Medicine.

In 1996 he was named the school's employee of the year and was a finalist for the award in other years.

Mayor Morton said Greene, a 20-year resident of Evanston, has "tremendous credentials," particularly in the area of conflict management.

Morris retired on May 15, making use of the early retirement incentive program offered by the city.

The clerk's position, the only full-time elected job in city government, will be up for election next spring.

Greene says he plans to run for election to a full term.

Greene holds an Associate of Applied Science in Biotechnology from the University of the District of Columbia, and a Bachelor of Science Degree in Biology from Bowie State University. He is also a graduate of class 14 of the Evanston Citizen Police Academy.

One of the highest-profile activities of the City Clerk is working with county officials to handle voter registration and the city's election activities.

Greene says he's working with Deputy Clerk Mayre Press to get up to speed on the operation of the office and hopes to improve response times for handling citizen requests.

In addition to Greene and Press, the clerk's office now has one full-time and one part-time temporary worker, and Greene said he hopes to be able to increase the office's staffing somewhat.