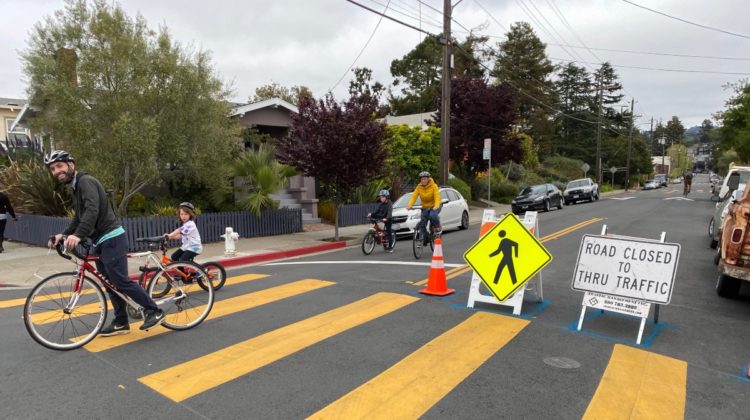 An image from a "slow street" test in Oakland, California. (City of Oakland website)

Greenleaf Street in Evanston could soon become the site of a shared street test that would limit through traffic by cars and open the street for walking, biking and running.

Similar programs, often referred to as Slow Streets, gained momentum during the COVID-19 pandemic as an option for encouraging healthy ways of getting from place to place at a time when auto traffic volumes had declined.

In a memo to Evanston’s Planning and Development Committee, Jessica Hyink, the city’s transportation and mobility coordinator, suggests using the full length of Greenleaf Street — from McDaniel Avenue to Lake Shore Boulevard — for the test, which she says could run from mid-July to mid-August.

Barricades would be placed with signs barring through traffic by cars and trucks. Hyink says the reduced traffic would make the street “feel safer for pedestrians and people on bicycles.”

She says there would be no additional restrictions on parking on the street. She says the project would support the city’s Climate Action and Resilience Plan by tending to reduce vehicle miles traveled and increase trips made on foot and by bicycle.

In Oakland, California, officials launched a Slow Streets Program on 20 miles of roadway in April 2020. An interim report on the project says support varied demographically and geographically “with the highest levels of support from higher income, White, and North Oakland residents.”

Hyink estimates that buying barricades and other materials to implement the test here would cost about $22,000 and that the materials could be reused for other special event and street closure activities.