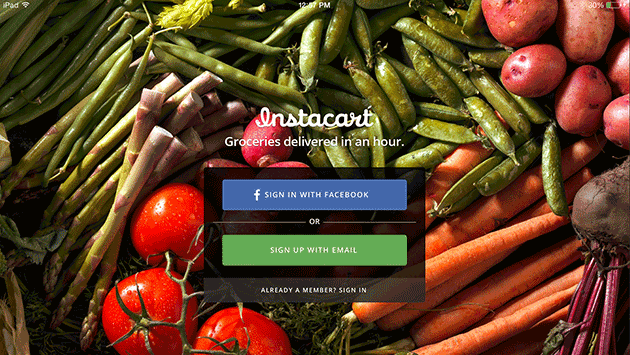 Instacart says it is now offering deliveries to Evanston residents from Jewel and Whole Foods stores.

A company spokesman says it has added service to Evanston, as well as Wilmette and Kenilworth and Chicago's Rogers Park neighborhood, because of higher than expected demand, most likely due to the recent inclement weather.

The service may also provide another food-buying option for customers who used to shop at the two now-shuttered Dominick's stores in Evanston.

In a news release, Instacart says its service is growing twice as fast in the Chicago area as it did in its first market, San Francisco, where the company started deliveries in May 2012.

"The reception to Instacart's same-day grocery delivery service in Chicago has exceeded our expectations. We've received a high volume of requests from the North Shore, so we expedited our expansion to reach these customers," said Apoorva Mehta, CEO and founder, Instacart. "Overall, we are ramping up our fleet on a weekly basis to meet rising demand and are factoring in weather forecasts due to the 100 percent spike we see in orders due to snow."

Instacart plans to add add other stores in the coming weeks. Customers can combine items from more than one store into one order and have them all delivered on the same day — even within one-hour and two-hour timeframes.

Instacart's manager in Chicago, Heather Wake, says, college students have turned out to be big customers because most don't own cars, making grocery shopping time consuming and a big hassle.

"Now that we're serving Rogers Park and Evanston, Loyola and Northwestern students can stock their fridges and pantries within an hour," Wake says.

Charges vary from $3.99 for a two-hour delivery window to $14.99 for one-hour service. New customers get free delivery of their first order.

Instacart says it is disrupting the traditional grocery delivery business with its approach, which utilizes a crowdsourced model of Personal Shoppers who use their own cars and smartphones to shop and deliver groceries to customers.

This model eliminates the need for costly infrastructure such as warehouses, trucks and full-time drivers. Instacart is not affiliated with the stores; its model is to connect customers with Personal Shoppers who shop on their behalf.

Evanston, of course, was the initial home of the more traditional grocery delivery service Peapod, which is now based in Skokie.