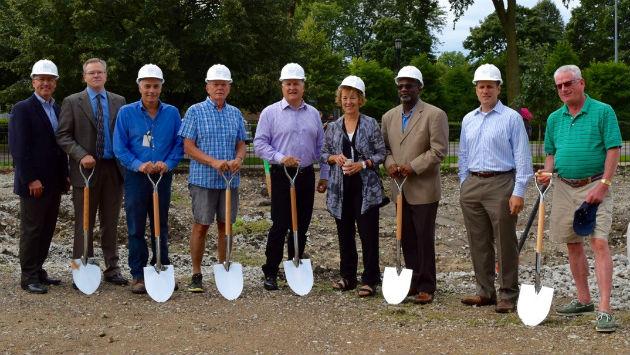 Kinzie Builders broke ground today on the final construction phase at Church Street Village, a townhome development in the 1600 block of Church Street in Evanston.

The first phase of the development was started a decade ago, but interiors of nearly half of the 32 townhouses were left unfinished when the project fell into foreclosure.

After the project was revived two years ago, the remaining first phase units were completed and sold last year.

The second phase will include eight townhomes, bringing the total number of residences at the community to 40.

The revived first phase "was very successful, with the townhomes selling out within six months of our sales launch,” said Steven Maher, managing broker for Kinzie’s brokerage division. “The city realized the positive impact the completion of this community would have on this area of Church Street, so they worked with us to quickly move forward with the second phase of homes.”

Located near the intersection of Church Street and Forence Avenue, Church Street Village features three-story brick townhomes with two or three bedrooms, 2½ baths, and an attached two-car garage. Townhomes in this second phase measure 1,540 to 1,632 square feet (excluding garage space), and will be priced from $335,000 to $385,000.

The new townhomes include a two-car garage and a den/family room on the first floor; an open-concept second floor with a dining area, living room, powder room and a kitchen featuring a breakfast bar/island; and bedrooms on the third floor.

The developers say the townhomes will feature high-end interior finishes such as granite kitchen countertops, stainless steel appliances, hardwood flooring throughout the second floor, and 9-foot ceilings on the second floor. Each townhome will use geo-thermal technology for heating and cooling.

The eight townhomes of this second phase will feature updated elevations with pedestrian-friendly architectural details, such as street-level entries and bay windows, along with mature landscaping. The townhomes, which front Church Street, will be set back 20 feet in order to maximize privacy.

“We had a great mix of buyers for the first phase, and expect the same diversity for these townhomes, too,” Maher said. “The broad appeal is twofold – a high quality, well-designed residence and a fantastic, walkable Evanston location offering proximity to transit, parks and vibrant downtown Evanston.”

Residents of Church Street Village will be served by Willard Elementary School and Haven Middle School, which are rated as “10” and “9” respectively on greatschools.org, and Evanston Township High School.

“With such low inventory of this caliber in Evanston, the pent-up demand for newly built, for-sale townhomes is quite high,” Maher said. “We’re looking forward to bringing these eight additional residences to market when we launch pre-sales.”

Kinzie Real Estate Group of Companies is a fully integrated real estate service provider based in Chicago. It serves the needs of clients in the Midwest and throughout the United States. Kinzie currently has more than $120 million in contracting of new multi-family, single-family and repurposed projects.