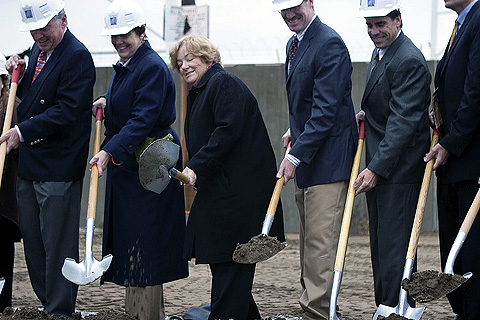 The site, at 413-421 Howard St., is just west of the Howard CTA station, which is in the midst of a major renovation project.

The new high-rise buiding was approved by the City Council on March 8, 2004, but the start of construction was delayed by financing issues and the need to work out agreements with the CTA, whose yards are just north of the site.

Plans call for 221 apartments on the upper 13 floors with 245 parking spaces on the lower four floors. 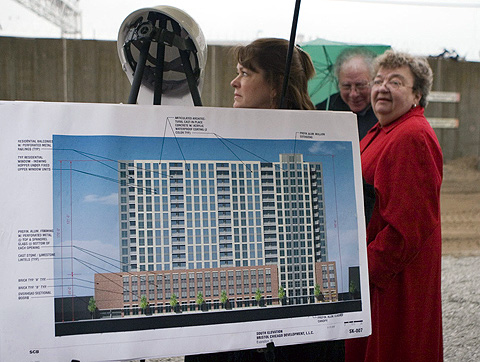 Despite the rain, several dozen people showed up for the event. (Allison Williams photos)

Bill Patrun of Bristol told neighbors at a community meeting earlier this year that the developers will be seeking monthly rents of $1.80 to $2 per square foot, so an 800 square foot one-bedroom apartment might rent for $1,450 per month.

â€œWe’re going to be competitive with downtown Evanston, where rents are a little higher,â€ Mr. Patrun said, adding that the tax increment financing district the project is part of makes the lower rents possible.

â€œOur market will be single professionals, empty nesters and ‘double income, no kids’ couples,â€ he said.