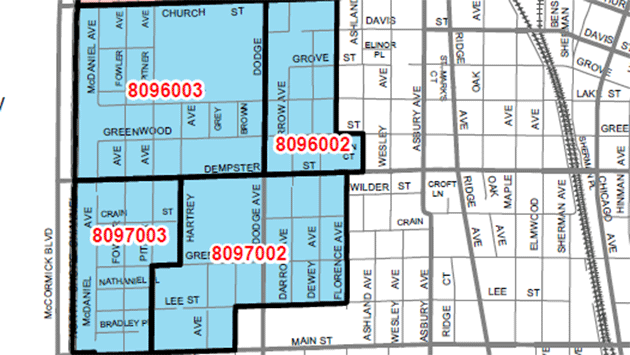 Evanston aldermen tonight will be asked to approve a plan to use more than a quarter-million dollars in federal grant funds to acquire and rehab two rental housing units in the western portion of the city's 2nd Ward.

The area targeted for the affordable housing is highlighted in blue.

Evanston aldermen tonight will be asked to approve a plan to use more than a quarter-million dollars in federal grant funds to acquire and rehab two rental housing units in the western portion of the city's 2nd Ward.

The proposal comes from Community Partners for Affordable Housing, a Highland Park group whose executive director, Rob Anthony, is an Evanston resident.

The project has been stalled since February, when aldermen on the Planning and Development Committee balked at approving the project without knowing where the units to be purchased would be located.

Focusing on the 2nd Ward, whose alderman, Peter Braithwaite, has indicated support for the proposal, may make it easier to win approval for it tonight.

The proposal also excludes properties in the two census tracts in the 5th and 8th wards that have been targeted for affordable housing developments under the city's $18 million Neighborhood Stabilization Program federal grant.

Aldermen in those wards have voiced concerns about having too much of the city's affordable housing concentrated there and not more widely distributed across the community.

The CPAP proposal would focus on larger apartments, suitable for families.

City officials in a memo outlining the proposal, say it's important for the group to be able to move quickly under "first look" programs that under federal law require banks that have foreclosed on properties to give non-profits like CPAP 10 days to decide whether to agree to purchase a property before its made available to other purchasers.

Once it goes on the multiple listing service, the memo says, prices are driven up "by investors entering the scattered site rental market."

The 10-day window, the memo says, doesn't provide time for the City Council to review a proposal before the deadline for action passes.

The city currently has $640,000 in HOME funds that under federal rules it needs to commit to projects by the end of August.

The assistance to CPAP proposal is for a $277,685 forgivable loan.