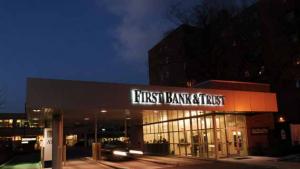 First the good news: Loans, deposits, and net assets have reached record highs at First Evanston Bancorp, Inc., the parent company of First Bank & Trust. But earnings for the first half of 2012 were 6.7 percent less than the same period last year.

In his quarterly report to shareholders, CEO Robert R. Yohanan blamed the earnings dip on a higher than planned provision for loan losses and a lower than planned net interest margin.

Although he labeled the company’s credit quality as “extraordinary” during the recent financial crisis, he said management felt it judicious to hike the loan loss provision “to allow for a degree of uncertainty with respect to difficulties which a few loan customers were experiencing.”

As for the net interest margin—the difference between the interest earned on loans and the interest paid on deposits—“we continue to experience very high liquidity,” Yohanan said, “substantially more than we can employ safely at reasonable returns.”

He said that last year at this time, the company’s net interest margin was 3.69 percent, while it was 3.03 percent during the first half of this year, up from a low of 2.97 percent.

“While the strong liquidity will serve us well as loan demand grows,” Yohanan said, “it currently depresses our net interest margin.”

Nevertheless, the three primary indicators of growth for the banking company—loans, deposits, and assets—continued their upward march.

The critical loan-to-deposit ratio declined from 85 percent last year to 72 percent this year. Generally, a higher ratio is more profitable for a bank, but it also represents increased risk, as more of a bank’s deposits being held for its customers are out in loans.

“The competition for good business loans has continued to heat up,” Yohanan said, “and extremely low lending rates have become the norm.” He said he expects this trend to continue for the foreseeable future.