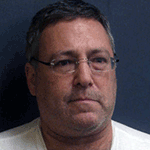 A police spokesman says officers from the department's Neighborhood Enforcement Team accompanied by officers from the Cook County Sheriff's Gun Unit and agents from the federal Bureau of Alcohol, Tobacco, Firearms and Explosives executed a search warrant for guns at the apartment and found three handguns and two rifles along with about 1,800 rounds of ammunition and other firearm-related items and equipment.

Police say Zoot, 53, had once had a firearms owner identification card, but that it had been revoked.

Zoot received a $50,000 recognizance bond and was scheduled for a pretrial services psychological evaluation.

Zoot spoke against a proposed assault weapons ban before the Evanston City Council last year and has been a frequent blogger on Evanston Patch using the title "An Armed Society is a Polite Society."

He's scheduled to appear in Skokie district court at 9 a.m. on Aug. 8.

Update 10:40 a.m. 7/7/14: In an April post to the Illinois Carry forum spotted by an Evanston Now reader, a person, apparently Zoot, posting under the pseudonym “Elmer Fudd,” said his troubles with state firearms regulators started after he was hospitalized last September.