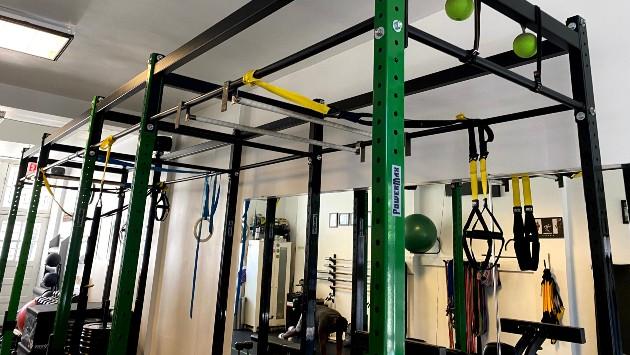 While gyms and fitness centers can reopen now with capacity limits and safety measures in the latest stage of the Restore Illinois plan, trainers and gym owners in Evanston say they’re not expecting a huge rush back.

They say people largely seem satisfied with adaptations made since closures took place in March — classes on Zoom and other online platforms have been successful.

“Our customers are pretty happy with virtual training,” said Dietrich Horsey, who owns D21 FitStudio. “They’re realized they can save time and money on coming to the gym and get the same benefit.”

When ETown Fitness Club closed its physical space in March, it made a “quick pivot” online, owner Kevin Teborek said. Since then, it’s loaned more than $60,000 in equipment to its members so they could continue training at home.

“They didn’t have to miss a beat,” Teborek said.

“Most of our clients still don’t feel comfortable coming back, even outside,” he said.

Some smaller studios, like D21, have continued operating throughout the pandemic. Horsey said he hasn’t experienced any issues with the in-person individual trainings that do occur — although the “fear factor” has also kept some from the space.

ETown began offering small outdoor classes as part of Phase 3, and worked to streamline each session so that most aspects are prepared in advance. Since everyone registers before attending, trainers can lay out and sanitize all the necessary equipment before clients arrive.

Patrons have their temperatures scanned upon arrival, wash their hands and then walk to the back of the facility to do their class in designated boxes. Masks are optional for clients but required for staff, Teborek said.

“I was most nervous about having to babysit to make sure people weren’t congregating towards each other, but everybody was very respectful of each other’s space,” he said. “It’s worked out really well and I’m very happy for that because I was a little nervous — you never know how comfortable people are going to be in that situation.”

ETown’s customers have been mixed on coming back for indoor personal trainings.

“Some of our clients are like, ‘Hey, I don’t feel comfortable inside, I’d like to continue going outside in order to be outside as much as we can.’ It’s worked pretty well,” Teborek said. “But some of our clients have specific goals or needs, and they’ll be inside doing specific stuff with the coach.”

Fitness coach Heather Collins has resumed one-on-one trainings at a shared space on Davis. Not many clients have expressed a desire to train indoors, she said, but the sessions she has run have gone well with social distancing and masking.

Wearing masks to work out indoors isn’t ideal for everyone, but Collins said it can provide another way to improve personal fitness.

“There’s actually a training device that you can buy that cuts down your oxygen to help you train better and learn to utilize oxygen more efficiently, so there’s been protocol for this as far as training, with having less oxygen coming in,” she said. “You do need to back off a little bit at first to account for that.”

In-person sessions, whether individual or group classes, evidently offer some advantages over the virtual workouts. Clients don’t have the space or equipment limitations that they might at home, and coaches are also able to provide more effective feedback.

“Part of my job is correcting people’s form,” Aarsvold said. “To do that, it’s easier to be able to walk around you and see from all different angles.”

Horsey said the mix of virtual and in-person sessions has been enough to keep D21’s staff working both through the shutdown and phase three.

“The smaller the better — we don’t have the overhead of some of the bigger facilities,” he said.

Starting today, the McGaw YMCA is reopening access to many of its offerings.

“Use of the fitness center and track, our new HIIT/Cycle Studio, and indoor group exercise will be available to active McGaw members by reservation,” President and CEO Monique Parsons said in an email.

McGaw is implementing a litany of safety measures, including specific entrances and exits, physical distancing, disinfecting equipment and no longer providing locker rooms and towels for the time being, Parsons said. It’s also limiting participation solely to “active” members.

ETown will reopen its indoor facility for group classes next week, taping off 225 square-foot boxes for each participant. Masks are still optional — Teborek worries that using one during a workout may not be healthy — but the gym is keeping its garage door open and employing new HEPA filters.

Collins has begun to offer outdoor group sessions, although without much buy-in for now.

“I would do at the most four to six people with social distancing, so at least 10 feet between them, and masks, but I haven’t really had clients that are interested in that,” she said.

Regardless of the method, Collins said she’s been happy to see the adjustments haven’t stalled many people’s progress.

“I’ve had clients say, ‘you know, I thought I was going to lose strength and I’m actually stronger.’” she said. “That’s been a nice thing to see.”

Fitness may not look the same as usual for a while, Aarsvold said, especially with the popularity of online classes. But Evanston’s trainers and coaches will continue to roll with the punches to keep people fit as the pandemic progresses.

“It’s so different,” Aarsvold said. “There’s no eBook, no certification that you can take to prepare for what we just went through.”