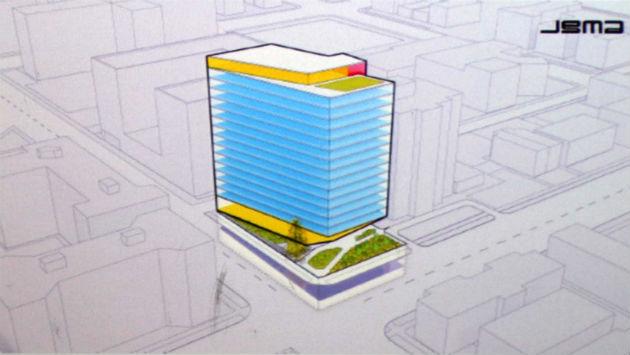 Plans for a new Housing Authority of Cook County development at 1900 Sherman Ave. have grown by roughly half in height and unit count since last spring.

Monocchio said the added size of the project is needed to make the financing work and provide a mix of market rate and subsidized units.

Last June HACC presented a version of the project that called for an 11 story building with 80 apartment units and parking and some commercial space on the ground floor..

A conceptual rendering of the plans from last June, showing an 11 story building.

The new plans call for 120 apartment units in a building with underground parking and resident amenities on the first and 16th floors.

As described in HACC’s presentation, the project would be designed to accommodate people in three income ranges.

HACC says the monthly cost of providing one of the units is about $1,633 — so the development needs the extra income from market rate units to cover the financing gap created by the subsidized units.

Most units in the building would be one bedrooms, but it would also include some two-bedroom units.

The HACC representatives didn’t specify exactly what the mix of market rate, “missing middle” and low-to-moderate income units would be.

Monocchio said many of the building’s units would have desirable views of Lake Michigan and called the site the most attractive one the agency owns anywhere in the county.

Opposition from neighbors, many living across Emerson Street at the Sherman Gardens co-op, forced a height reduction from 12 to nine stories for the market-rate 811 Emerson apartment building now under construction just west of the 1900 Sherman site.

Monocchio said Sherman Gardens residents had voiced support for the 1900 Sherman plans, but conceded that they were last contacted when the project was still seen as only being 11 stories tall.

Alderman Peter Braithwaite, 2nd Ward, said he was excited about the proposal and Mayor Steve Hagerty said he felt honored that HACC is looking to invest in Evanston to help improve housing affordability here.

The City Council took no action on the plans, which have yet to be submitted for formal planned development review.