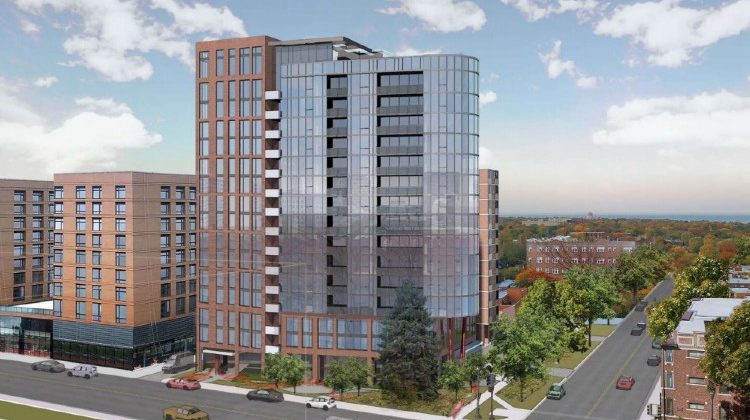 A rendering of the planned new building at 1900 Sherman Ave.

Plans for a 16-story mixed-income apartment tower at 1900 Sherman Ave. will be reviewed by Evanston’s Design and Project Review Committee on Wednesday.

The building would be constructed on what’s now a parking lot for the HACC-owned 11-story, 100-unit Perlman Apartments building which would remain in place.

The tower would have 168 apartment units and 37 below-grade parking spaces.

Under the city’s planned development process the project will need a variety of zoning variations, as outlined in a memo from city staff.

HACC is requesting that the parcel be rezoned C1a, commercial mixed-use, from its current R-6, general residential, zoning.

That would require a simple majority vote by City Council unless neighbors opposed to the development submit sufficient petition signatures to trigger a three-quarters majority vote requirement.

The proposed building height of just under 173 feet exceeds the maximum site development allowance of 97 feet, but because the proposal meets inclusionary housing ordinance requirements, a Council super-majority vote is not required to approve that.

The project will remove 22 existing surface parking spaces, replacing them with 37 below-grade spaces, but that leaves the development short 81 spaces of the parking required under the zoning code. HACC has proposed leasing spaces elsewhere downtown to cover that shortfall.

The project is designed to include 34 rental units affordable to persons whose incomes are at or below 50% of area median income and an additional 10% of units targeted to “missing middle” households at 80% to 120% of AMI.

The building also will be age-restricted to persons 55 and above.

HACC’s proposals says the location “is a perfect environment for senior living” with many amenities nearby.

The virtual DAPR meeting is scheduled for 2:30 p.m. Wednesday. More details on the proposal and information on how to access the session are available online.