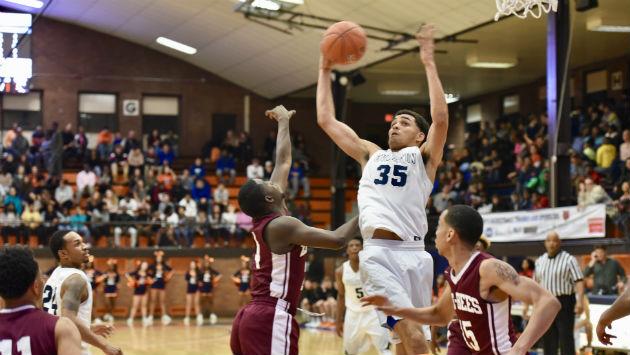 While everyone associated with the Evanston Township High School basketball program is excited — justifiably so — about the upside of the four freshmen who have earned minutes for the varsity squad, another player’s progress has gone almost unnoticed.

Six-foot-7 senior Matt Hall finally muscled his way into the spotlight Tuesday night in the Wildkits’ last appearance at Beardsley Gym in 2017.

Hall grabbed a career-high 13 rebounds, blocked 3 shots and scored 7 points as Evanston crushed Zion-Benton 62-42 in a non-conference contest and improved to 8-2 on the season.

A spindly post player who almost never saw the court in his first three years at ETHS, and who had problems just catching passes from his teammates when he did play, Hall is a bigger and better version of himself one-third of the way through his senior season.

He’s helped the Wildkits hold their own in the paint despite a rugged schedule where every opponent seems to have a bigger post player than Hall. Tuesday, he grabbed 7 defensive boards and his total of 13 came in just 19 minutes of playing time. 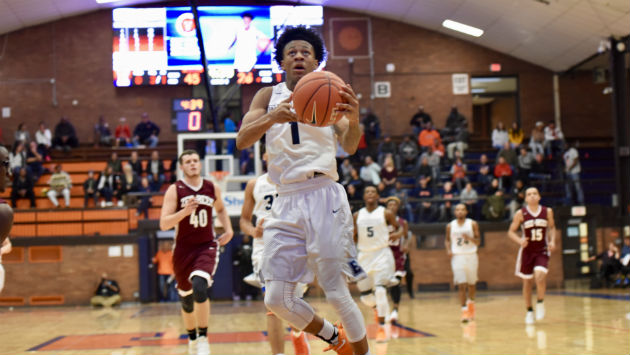 Jaheim Holden of Evanston (1) breaks ahead of the pack for a fast-break layup Tuesday.

“Without question, Matt Hall was the difference in the game tonight,” said ETHS head coach Mike Ellis. “He was very steady all night on the interior with all of those defensive rebounds, and he had a lot of putbacks on offense, too. I think his teammates really appreciated his play tonight.

“Matt probably worked harder than anyone else in the off-season, and he reshaped his body so he’s stronger and quicker. He’s also got softer hands now. We definitely need to take more advantage of his strengths. Maybe things have just started to finally click for him. He started out the year playing really well and now he might be our most consistent player. He’s playing within himself and he’s very comfortable with his role.”

“The transition for me from last year is that the guys depend on me to grab a majority of the boards,” said Hall, the lone inside presence as a complement to Evanston’s four-guard alignment. “Over the summer the coaches said they wanted me to rebound better, and do it every game, night in and night out. That’s what I’m trying to do.”

Hall’s effectiveness in the paint limited the losers to one shot on most of their offensive possessions when he was in the game. And the Wildkits limited the highly-touted Z-B freshman, Augillard, to 4-of-17 shooting from the field. Guarded for the most part by two ETHS freshmen — Blake Peters and Jaylin Gibson — Augillard never got off a shot that wasn’t challenged and also committed 4 turnovers.

Evanston scored the first 10 points of the game and owned a 33-22 advantage at halftime after  freshman Itchy Holden sliced through the lane and curled in a layup that just beat the buzzer.

Peters, who drew two early personal fouls and sat out most of the first half, returned to knock in 3-of-6 shots from 3-point range to help the Kits outscore the visitors 22-9 and put the game out of reach.

Evanston will return to the Centralia Holiday Tournament for the first time since 1979 and will open at 6 p.m. against O’Fallon at the 75th annual event. The Wildkits played at Centralia from 1976-79 under former head coach Herb Williams, who was a two-time All-Stater at Centralia before he began his coaching career at ETHS.

In four previous appearances at the tourney, the Wildkits finished third in 1976 and advanced to the championship game in 1977, losing to East St. Louis 81-64 in the finale.

The tournament concludes on December 30th.