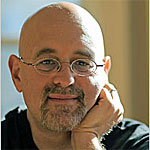 Kicking off a new Symposium on Mind and Society, best-selling author Daniel Gilbert, a professor of psychology at Harvard University, will deliver a free public lecture at Northwestern University in Evanston April 19 on the topic of “Happiness: What Your Mother Didn’t Tell You.”

Gilbert wroteThe New York Times best-seller “Stumbling on Happiness” and the host of the PBS special “This Emotional Life.” His research examines the psychological foundations of happiness and the mistakes people often make when attempting to predict their future happiness.

Gilbert will explain in his lecture why, when it comes to finding happiness, we can’t always trust our imaginations — or our mothers.

“Dr. Gilbert is a world leader in the area of research on the psychology of happiness,” said Northwestern Assistant Professor of Psychology Robin Nusslock, one of the event organizers. “His lecture will be a wonderful opportunity for our students, faculty and guests to learn some late-breaking ideas among researchers on what makes us happy and what does not.”

Gilbert's talk will be the featured event of the Inaugural Northwestern Symposium on Mind and Society, which is being sponsored by the psychology department at Northwestern’s Weinberg College of Arts and Sciences.

"The Northwestern Symposium on Mind and Society was developed to initiate dialogue both within the Northwestern community and the general public about ideas that are central to our society and well-being,” Nusslock said. “This inaugural event will hopefully be the first of many future such dialogues that will likely occur on a biennial basis and involve prominent thinkers and researchers in our society.”

The talk by Gilbert will take place at 7 p.m. Thursday, April 19, at the Pick-Staiger Concert Hall, 50 Arts Circle Drive, on Northwestern’s Evanston campus.

Psychologists observe that most people think they know what would make them happy and that their only problem is getting it. But research in psychology, economics and neuroscience shows that people are not very good at predicting what will make them happy, how happy it will make them and how long that happiness will last.

As a professor of psychology at Harvard University, Gilbert does research that examines the mistakes people make when they attempt to predict their emotional reactions to future events.

He has won numerous awards for his research and teaching, including the American Psychological Association’s Distinguished Scientific Award for an Early Career Contribution to Psychology.

In 2008 he was elected to the American Academy of Arts and Sciences. His 2007 book, “Stumbling on Happiness,” spent six months on The New York Times bestseller list, has been translated into 30 languages and was awarded the Royal Society’s General Book Prize for best science book of the year.

Gilbert is a contributor to Time, The New York Times and NPR's “All Things Considered” and has been a guest on numerous television shows including NBC’s “The Today Show,” ABC’s “20/20” and the Comedy Channel’s “The Colbert Report.” He hosted and co-wrote the award-winning NOVA television series “This Emotional Life,” which aired on PBS in January 2010 and was seen by more than 10 million viewers.

Additional information on the talk, the location, parking and a map is available online.