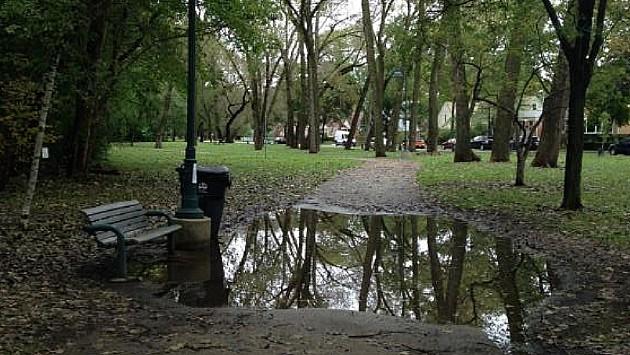 Evanston aldermen Monday are scheduled to approve a contract award to Hacienda Landscaping to renovate Harbert Park, located along the North Shore Channel between Main and Dempster Streets.

In January the city received a $320,000 grant from the state’s Open Space Lands Acquisition and Development program toward the project and initially budgeted another $320,000 in city funds for the work.

But in a memo to aldermen, Project Manager Stefanie Levine says bids for the project came in substantially higher than expected, ranging between the low bid of $820,880 from Hacienda to a high of $926,527 from G.A. Johnson for the base bid work.

In addition, Levine says, residents at a public meeting last March strongly urged that work to reduce flooding along the park’s pathways be added to the project.

But alternate bids to address the drainage issues across the full length of the half-mile-long park ranged from just unde $300,000 to nearly $500,000.

So staff is recommending the contract award only include drainage improvement along the bike path for a one-block stretch from Bradley Place to Lee Street that Hacienda, based in Minooka, Illinois, bid at $78,420.

Levine says staff considered seeking new bids, but faces a deadline of Jan. 30, 2021 to complete and close out the project or have to return the state grant funds. In addition, Levine says, conditions of the grant bar the city from dropping any of the proposed improvements that were included in the grant application, although it might be possible to reduce their scope.

In addition to the state grant, the new proposed funding sources for the expanded project include over $142,000 in general obligation bonds, $100,000 in “Good Neighbor Funds” from Northwestern University, $150,000 from the neighborhood improvement program and nearly $187,000 in funds saved on other city projects.

Hacienda Landscaping is a minority-owned firm and qualfied for a 100% credit in the city’s MWEBE program that seeks to have at least 25% of city contracting work go to minority, women-owned or Evanston-based firms.