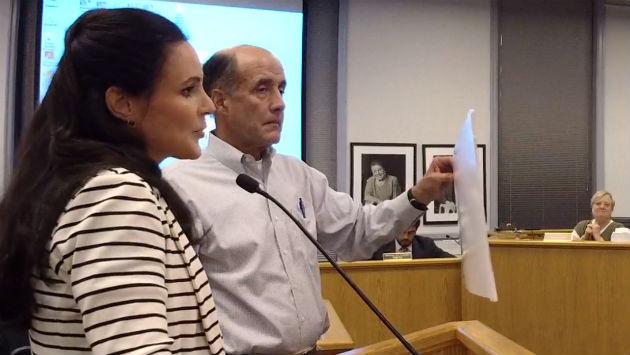 With a group of local residents offering to pay for demolition of the Harley Clarke mansion, an Evanston aldermanTuesday night called for the idea to be debated at the City Council’s next meeting.

During public comment, Nicole Kustock and Jeff Coney said they’d like to see the lakefront dunes and the parkland on which the mansion sits restored to their natural state.

Coney quoted books citing the historical significance of the spot as a location where early French explorers reputedly stopped on their journey along Lake Michigan.

Kustok said the mansion and its coach house obsure the view, and said they’ve secured funding to deconstruct the buildings “through generous contributions of numerous residents.”

“No additional fundraising would be required, no liability issues would persist, no prolonged construction period would be needed,” Kustok said, as Coney showed aldermen an image of a mural at the School District 65 administration building depicting the Grosse Point lighthouse and beach as it might have looked before the adjoining mansion was built.

Kustok is an organizer of a group called Evanston Lighthouse Dunes, which advanced the idea of demolishing the mansion last fall.

Alderman Ann Rainey, 8th Ward, called for city staff to put together a resolution that would accept the private funding for demolishing the mansion and schedule the resolution for debate at the Council’s next meeting. “It’s time to move forward, and this offer is limited,” Rainey said.

But, in an indication of the division on the Council over the fate of the mansion, Alderman Eleanor Revelle, 7th Ward, said talk of deconstructing the mansion is premature.

She said the Council should give the Evanston Lakehouse and Garden group, which has proposed developing an environmental education center in the mansion, at least a year to try to raise $1 million as an indication that it has the capacity to carry out an estimated $5 million in renovation work on the building.

Last month aldermen rejected the lakehouse group’s proposal to lease the mansion amid concerns over the financial viability of its plan.

Aldermen Tuesday also agreed, because of a light agenda for their next scheduled City Council meeting on June 11, to cancel that session and instead meet next on June 18, the scheduled night of a special meeting on the city’s budget.