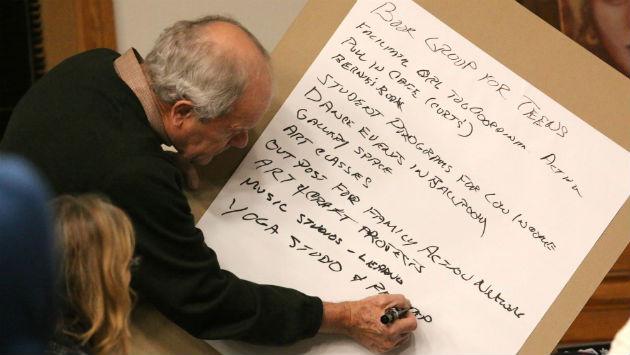 About 100 people turned Thursday evening to brainstorm ideas for possible new uses for the city-owned Harley Clarke mansion in Evanston.

Organizers of the event, held in the Parasol Room at the Civic Center, intentionally avoided any discussion of how the ideas might be funded, saying they planned to save that for a followup meeting planned for Feb. 28.

Residents arrive for the session.

Some of the ideas announced to the group at the end of the meeting included:

Evanston voters last fall endorsed an advisory referendum supporting preserving the mansion “at minimal or no cost” to taxpayers.

That led the City Council to drop efforts to demolish the mansion, a course the Council had embarked upon after concluding that a non-profit group seeking to run educational programs at the mansion lacked the financial resources to fund the project.

Previously the city had rejected a proposal to redevelop the mansion as a boutique hotel. And a plan to turn it into an office for a state agency fell apart after a change of administrations in Springfield.

The mansion’s future went up for grabs after the city declined to renew a long-term lease with the Evanston Art Center in a dispute over maintenance responsibilities for the property.

The mansion, built by a utilities executive in the 1920s, was acquired by the city in the 1960s, in an effort to expand public beaches and park land along the lake.