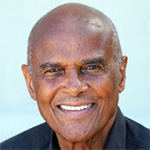 Belafonte, the "King of Calypso," who made the songs“Jamaica Farewell” and “Banana Boat (Day-O)” hits on the Billboard charts, met a young Dr. Martin Luther King Jr. in New York in the 1950s. They developed a long friendship that transformed Belafonte’s life.

Since Northwestern recently designated Martin Luther King Jr. Day (Jan. 21) as an official University-recognized holiday every year, starting in January 2013, the University will celebrate Monday, Jan. 21, by suspending classes and closing offices for all Northwestern students, faculty and staff.

The University’s observance on the Evanston campus will get underway Jan. 21 with several events on the actual Martin Luther King Jr. holiday, including a 2 p.m. staged reading at the Josephine Louis Theater of Pulitzer Prize-winning playwright David Mamet’s incendiary crime mystery “Race,” which explores issues of prejudice, oppression and guilt, and an evening address by Illinois State Rep. Napoleon Harris.

Harris will be the keynote speaker during a 7 p.m. Monday, Jan. 21, Candlelight Vigil at Alice Millar Chapel, hosted by Alpha Phi Alpha Fraternity.

Harris, who is an alumnus of Northwestern’s School of Communication, is the newly-elected Illinois State Senator from the 15th District, a former member of the Northwestern University football team and the first-round draft pick for the Oakland Raiders in the National Football League (NFL).

During a Jan. 21 Day of Service, Northwestern students and Evanston middle-schoolers participating in the Associated Student Government’s annual Eva Jefferson Day program, will engage in a variety of service projects throughout the Chicago area.

Born in New York’s Harlem neighborhood in 1927, Belafonte is the son of Caribbean-born immigrants.

He returned with his mother to her native Jamaica as a young boy. Following the outbreak of World War II, he and his mother returned to the United States, a transition Belafonte, a teenager at the time, found difficult.

Unable to finish high school, he enlisted in the U.S. Navy and served for almost two years as a munitions loader. After his tour of duty ended, he was honorably discharged and returned to New York City where he worked in both the garment district and as a janitor’s assistant.

He went on to pursue a career as an actor. His lead role in Otto Preminger’s film adaptation of Oscar Hammerstein’s “Carmen Jones,” took top critical honors, attracted Oscar nominations and made Belafonte a star.

His recording “Belafonte” reached number one on the Billboard charts and started a national craze for calypso music in the mid-1950s. Belafonte’s RCA album, “Calypso,” made him the first artist in industry history to sell more than one million LPs.

Belafonte also went on to become television’s first black producer, winning an Emmy for his CBS production of “An Evening with Belafonte,” directed by Norman Jewison.

Belafonte’s many firsts in the overturning of numerous racial barriers in the world of culture in America is legend. Belafonte met a young Dr. Martin Luther King Jr. on his historic visit to New York in the 1950s.

From that day until the leader’s assassination, Belafonte and King developed a deep friendship that for Belafonte still stands as one of the most precious of his experiences.

Disturbed by cruel events unfolding in Africa due to war, drought and famine, Belafonte set in motion the wheels that led to “We Are the World.” He contacted manager Ken Kragen, and they, along with others, guided and directed the project known as USA for Africa (United Support for Artists for Africa) the name under which 47 predominantly U.S. artists, led by Michael Jackson and Lionel Richie, recorded the hit single “We Are the World” in 1985.

Belafonte was also prominent in the contribution to the ending of the oppressive apartheid government of South Africa and for the release of his friend, Nelson Mandela, after more than 27 years of incarceration.

President John F. Kennedy appointed Belafonte to be the cultural advisor for the Peace Corps, a position he held for five years.

In 1987, Belafonte was appointed as UNICEF Goodwill Ambassador and has continued to devote himself globally to civil and human rights issues, focusing in particular on the United States and Africa. Belafonte’s memoir, “My Song,” was released last October, in conjunction with an HBO bio-documentary titled “Sing Your Song.”

A free screening of Belafonte’s film will be shown at 2 p.m. Saturday, Jan. 26, at the Mary and Leigh Block Museum of Art, Evanston campus.