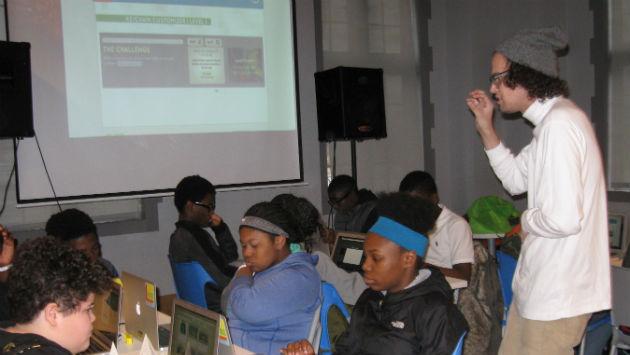 Some sixteen 8th graders from a Haven Middle School math support class were hosted Thursday by the staff of the new MetaMedia  Center at Evanston’s McGaw YMCA.

The students received a tour and an introduction to the facility in hopes that they will take advantage of it as a place to hang out after school and to let their imaginations roam in a productive way.

The facility was made possible by a $1 million gift to the Y from the Lewis-Sebring Family Foundation.

Basically, it’s a place full of computers, 3D printers, digital music studios, and other fun stuff that are designed to entertain and educate Evanston students who are fascinated by life in the digital world.

Best of all, the facility is free to the young people it is designed so serve, and Thursday’s activity was created by the staff to encourage more of the community’s young people to take advantage of it, in hopes that more of them will be excited about pursuing careers in science, technology, engineering, and mathematics.