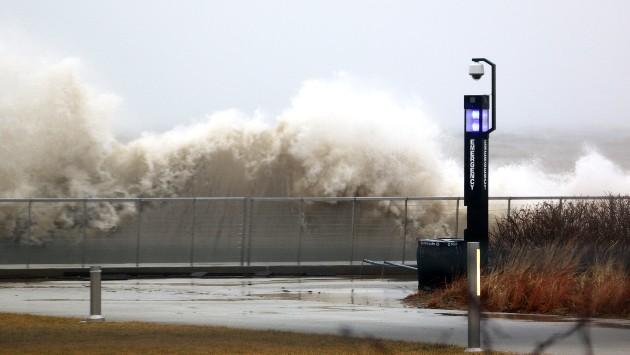 Evanston’s Public Works Agency this morning says the latest forecasts indicate we should get less ice from this weekend’s storm than originally forecast — because temperatures are slightly warmer. But we still can expect freezing rain and as much as three inches of snow.

Public Services Bureau Chief Edgar Cano says rain is expected to continue until about 11 a.m. with an additional 0.15 inch possible.

Freezing drizzle should develop between 11 a.m. and 3 p.m., then changing to freezing rain and sleet until 7 p.m.

Snow is expected from 7 p.m. tonight until 3 a.m. Sunday.

He says city crews are on alert and ready to respond as needed.

Waves wash over the beacon at the Church Street boat ramp this morning.

The National Weather Service has issued a flood watch until 6 p.m. tonight, a lakeshore flood warning until 6 a.m. Sunday and a winter weather advisory is in effect until 3 a.m. Sunday.