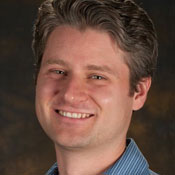 Most people don’t think worms are cool. But the tiny flatworm that Northwestern University scientist Christian Petersen studies can do something very cool indeed: it can regenerate itself from nearly every imaginable injury, including decapitation. When cut in half, it becomes two worms.

Most people don’t think worms are cool. But the tiny flatworm that Northwestern University scientist Christian Petersen studies can do something very cool indeed: it can regenerate itself from nearly every imaginable injury, including decapitation. When cut in half, it becomes two worms.

This amazing ability of the planarian flatworm to regenerate its entire body from a small wedge of tissue has fascinated scientists since the late 1800s. The worms can regrow any missing cell or tissue — muscle, neurons, epidermis, eyes, even a new brain.

Now Petersen and colleague Peter Reddien of the Massachusetts Institute of Technology (MIT) have discovered that an ancient and seldom-studied gene is critical for regeneration in these animals. The findings may have important ramifications for tissue regeneration and repair in humans.

The gene, called notum, plays a key role in the regeneration decision-making process. Protein from this gene determines whether a head or tail will regrow at appropriate amputation sites, the researchers found.

“These worms are superstars in regeneration, and we want to learn how they restore missing body parts,” said Petersen, an assistant professor of molecular biosciences in Northwestern’s Weinberg College of Arts and Sciences. “We anticipate that understanding the details of how regeneration occurs in nature will ultimately have a broad impact on the repair of human tissue.”

The study is published in the May 13 issue of the journal Science. Petersen, a former postdoctoral fellow in Reddien’s lab, is the first author. Reddien, associate professor of biology at MIT and the Whitehead Institute for Biomedical Research, is the other author.

The ability of planarians to regenerate any missing tissues after injury depends on a pool of adult stem cells. Researchers hope that by studying this worm they will understand the molecular processes that naturally allow stem cell-mediated tissue repair in higher animals.

In their paper, Petersen and Reddien show that the gene notum is critical for head regeneration in planarians. Inactivation of notum caused animals to regenerate a tail instead of a head, creating two-tailed animals.

“Injuries can alter tissues in many different ways, so regenerating animals must have robust systems that specify restoration of appropriate structures,” Petersen said. “Our results suggest that the animals ‘decide’ what needs to be regenerated, in part, by using cues that indicate axis direction with respect to the wound.”

Planarians are 2 to 20 millimeters in size and have a complex anatomy with around a million cells. They live in freshwater ponds and streams around the world. The worm’s genome has been sequenced, and its basic biology is well-characterized, making planarians popular with scientists.

Petersen and Reddien also found that notum controls a widely used biochemical circuit, Wnt signaling, in order to promote proper regeneration. This ancient signaling circuit operates in all animals and controls many processes in development and disease, including tissue repair and cancer progression.

In the paper, the authors describe how the gene notum acts at head-facing wounds as a dimmer switch to dampen the Wnt pathway and promote head regeneration. When the head or tail of a planarian is cut off, Wnt is activated. This Wnt activity turns on notum, but only at head-facing wounds. In a feedback loop, notum then turns Wnt down low enough that it can no longer prevent a head from forming. In tail-facing wounds, however, notum is not activated highly, a condition that promotes tail regrowth. (It takes the worm about a week to regrow a head or tail.)

The researchers are intrigued by this new role for notum. Like the Wnt signaling pathway, notum is highly conserved throughout species, from sea anenomes to fruit flies to humans, but little is known about its roles in biology. Because both notum and the Wnt signaling pathway are so evolutionarily ancient, their interaction in planarians may indicate a relationship that is important in other animals as well.

“We anticipate that this phenomenon of feedback inhibition regulating the levels of Wnt activity will be seen broadly in other biological contexts,” Reddien said. “Wnt signaling is so broadly studied and important in biology, including for tissue repair and regeneration. Notum isn’t really on the map for the broad roles Wnt signaling plays in tissue repair, but this work demonstrates the central role it can play.”

The National Institutes of Health, the Howard Hughes Medical Institute, the American Cancer Society and the W. M. Keck Foundation supported the research.

The name of the paper is “Polarized Activation of Notum at Wounds Inhibits Wnt Signaling to Promote Planarian Head Regeneration.”