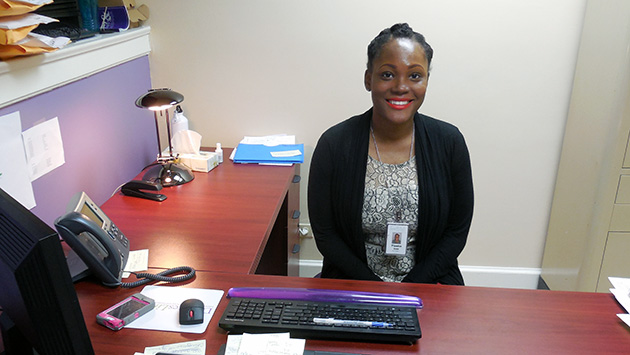 Goss offered the example of an uninsured man who made an appointment at the center.

Although he'd been trying to eat healthy and get exercise, tests revealed that he had high blood pressure and early stage diabetes. Doctors also learned he had a family history that meant he should get a colonoscopy.

Erie staff members gave him information about diet and exercise and referred him for a colonoscopy. He has begun losing weight and has made an appointment for his colonoscopy.

When it comes time to pay for services at the health center, they offer a sliding fee program, which discounts the amount owed based on income and number of people in the household.

The number of patient visits from October through May was 1,285 medical visits and 1,274 dental visits, with the number of unduplicated medical patients served at 678.

The services will improve when they move to the new location at Dempster and Hartrey in a newly renovated, 16,000-square-foot facility. The current facility, on the ground floor of the Civic Center at 2100 Ridge Ave., has four medical exam rooms and two for dentistry. The new facility will have 15, providing for an estimated 5,500 patients and over 18,500 annual patient visits.

Through donations and grants, including a $1 million grant from the North Suburban Healthcare Foundation, the new health center is now scheduled to open by late November.

Back in the Spring, Erie officials had forecast that the new center would be open by August.

Goss was unable to provide details about the construction delay, but did say that community partners have remained supportive and excited about the new facility.

“Anyone can be seen here. The philosophy at Erie is just making sure that everyone knows that health care is a right, not a privilege,” Goss said.