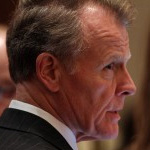 “In light of events in recent months in Illinois and in other parts of the country, it’s appropriate and necessary that we give a full vetting to proposed state legislation on this matter,” Madigan said.

Illinois is the only state in the nation that does not allow people to carry a weapon in some fashion and with some regulations.

Madigan said the hearings, one in Chicago and the other at the state Capitol, will give advocates, opponents and police officers a chance “to offer their views and argue their cases to legislators and the people of Illinois.”

But the case for concealed carry already may be closed.

In December, a federal appeals court struck down Illinois’ law that stops people from carrying a weapon.

And Todd Vandermyde, a lobbyist for the Illinois State Rifle Association, said that ruling closed the door on many of the “negotiations” that surrounded concealed carry legislation in the past.

“There are certain things that are not negotiable in the process,” Vandermyde said last week at a public hearing.

Concealed carry “will be a ‘shall issue’ permit, there will be no discretion by some bureaucrat as to whether you get to exercise your right,” he said.

“The clock is still ticking. June 10 is the deadline,” Phelps said. “We filed a bill, a lot of people didn’t think we were going to because we don’t have to. Constitutional carry will set-in if we don’t do something.”

Phelps’ plan would require gun owners be trained, pass a background check and obtain a permit.

Phelps said he is fine with some limits on where people could take their weapon, including schools, libraries, taverns, amusement parks, airports, government buildings or anyplace prohibited by federal law.

So if lawmakers must act to stop everyone from being able to carry a gun, but will not be able to place broad limits on just who can carry a gun, what can lawmakers do?

State Sen. Kwame Raoul, D-Chicago, will have to figure that out.

Raoul will now head the Illinois Senate’s push to legislate who can carry a weapon in Illinois.

“The negotiations I lead will respect firearm owners’ constitutional protections as interpreted by the Supreme Court and lower courts, and it will acknowledge the fact that there are many law-abiding Illinois gun owners who legitimately wish to use guns for sport and self-protection,” Raoul said in a statement today.

“At the same time, we will also acknowledge the alarming prevalence of gun violence and the need to keep guns out of the hands of those most likely to use them for harm.”

But on Wednesday, Raoul said the focus on guns should not just be on concealed carry or even an assault weapons ban.

“I understand there was a great tragedy that happened at Newtown (Conn.), and Aurora (Colo.), and Columbine (High School in Colorado),” Raoul said. “But on a day-to-day basis, in my neighborhood, in my district, it’s these guns being transferred through straw purchases to gang-bangers and people we know will do harm with them.”

Raoul said he wants to address that problem as well.

The first House hearing is set for Feb. 19 in Springfield, the second on Feb. 22 in Chicago.

The Senate has not set any hearing dates yet.