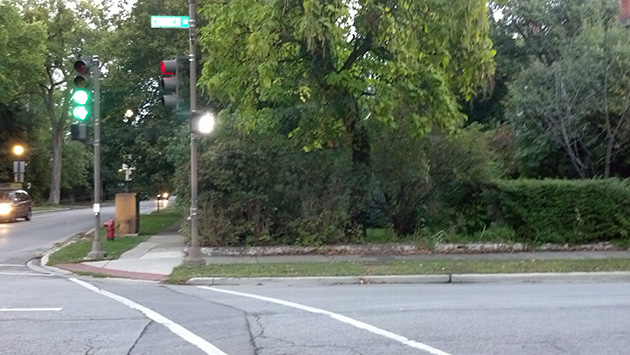 Evanston's Human Services Committee has put on hold a proposal to limit the height of hedges in front and side yards while asking city staff to gather more information about it.

At Monday night's meeting, Alderman Dolores Holmes, 5th Ward, said she asked staff to develop the proposal after receiving several calls from residents who were concerned about safety hazards large shrubs and hedges posed to pedestrians.

In an interview following the meeting, Holmes said the residents were particularly concerned about people hiding behind tall bushes.

The proposed ordinance, drafted by City Attorney Grant Farrar, would limit the height of hedges and shrubs to six feet.

An existing ordinance already bars hedges that intrude on the public right-of-way, including sidewalks. City staff were not immediately available to report how many citiations are issued for violation of that ordinance, and a stroll down many streets in town reveals numerous apparent violations.

The proposed ordinance was unpopular with at least two of the five aldermen present at the meeting.

"To restrict hedges to six feet doesn't improve much of anything," Alderman Mark Tendam, 6th ward, said. "To restrict them to four feet seems truly, truly ambitious and overreaching."

While he was sympathetic to residents' safety concerns, Tendam said he felt there are better ways to address the issue than imposing a limit on hedge heights.

Alderman Judy Fiske, 1st Ward, said she had received a "strong negative response" about the proposed ordinance from her constituents.

Alderman Jane Grover, 7th Ward, wondered how the city would enforce the proposed ordinance, what the fine would be

Grover's questions were echoed by Alderman Peter Braithwaite, 2nd Ward, who also asked how communities with similar ordinances dealt with the situation.

Top: Hedges tall, and not so, at a home on Church Street near downtown Evanston.