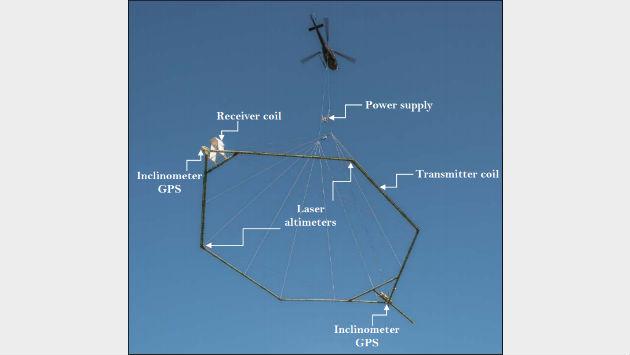 A helicopter trailing a hexagonal platform filled with electronic gear will be flying along the Evanston lakefront this week.

The flights are part of a project being conducted by the Illinois State Geological Survey to map the location and thickness of sand deposits in Lake Michigan from Kenosha to Chicago.

The Illinois Department of Natural Resources Coastal Management Program is also working on the project.

Officials from the two agencies says the sand survey will produce the most comprehensive measures yet of sand deposits and are needed to figure out how storm waves, fluctuating lake levels and longshore currents affect sand erosion and accretion along the shore.

Assistant City Manager Marty Lyons says the flights are expected to start Monday, March 27, and be finished by the end of the week.

Last year Evanston officials had to relocate the city’s dog beach after rising lake levels caused the old one to mostly disappear. The size of city beaches has fluctuated dramatically over the years.

The agencies say the surveys present no risks to humans, animals or infrastructure,

The equipment creates an electric current that generates a magnetic field in the ground and then measures the strength of the magetic field to map the sand deposits.

The helicopter is to fly at an altitude of 150 feet and a speed of 150 miles per hour and won’t be flying over buildings.

The agencies say the magnetic field created is only one one-hundredth as strong that experienced by someone riding on an electric train, like the CTA Purple Line.