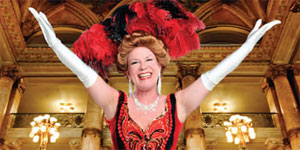 The Evanston-based Light Opera Works company wraps up its 30th anniversary season with a restaging of the Broadway musical "Hello, Dolly!" at Northwestern University’s Cahn Auditorium, opening with a 2 p.m. matinee this Sunday.

The show, based on the Thornton Wilder play "The Matchmaker" tells the story of Dolly Gallagher Levi, who turns New York City upside down in her pursuit of a wealthy husband.

The show runs through Jan. 2. Tickets are available online. Prices range from $32 to $94.