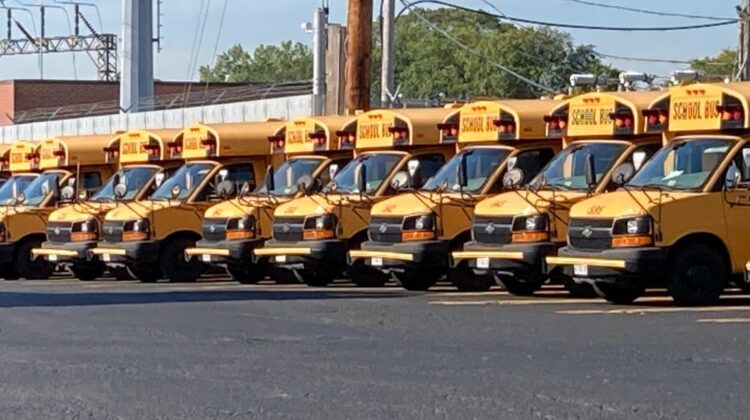 Buses in the Positive Connections yard on Emerson Street.

If you know how to operate a school bus, you are literally in the driver’s seat.

The shortage of school bus drivers nationwide has led to some desperate scrambling in a variety of districts, although not in Evanston/Skokie District 65, where transportation coordinator Lou Gatta said, “I’m really happy and proud of what we’ve done” to start the school year.

Gatta told the Board of Education on Monday night that he was able to line up five contract bus companies for the 2021-22 academic year, rather than relying on just one or two.

“We find ourselves in a much better position than other districts,” he said.

Chicago, for example, provided some parents with $1,000 in order to pay for private transportation during the first two weeks of school, because there were not enough drivers to staff all the bus routes.

And suburban Oswego went to remote learning for some schools last week, because so many drivers called off from work.

While Gatta acknowledged a small number of parental complaints in District 65, he said transportation locally has mostly gone smoothly.

Still, he told the Board that schools face “an extremely challenging environment” in recruiting drivers, because this year, “everyone is so strapped.”

That’s probably why the District 65 website has a large notice that the school system’s main bus contractor, Positive Connections, is offering up to a $2,500 sign-up bonus, paid training, and $20.50 hourly pay (or more with experience) for drivers.

Gatta said drivers have a lot of options, from other school bus operators, to package delivery firms such as FedEX, Amazon and UPS.

Pay is not the only challenge districts face. Gatta said vaccine requirements and COVID-related quarantines also make finding drivers, or keeping them on the job, difficult.

“It’s not going to ease up,” he said. “If anything, it’s going to become more difficult” in the winter, if COVID cases increase or the flu makes a lot of drivers ill.

By changing start times for middle schools, District 65 was able to get by with fewer bus routes, saving money and requiring fewer drivers.

Other options, Gatta said, include combining bus routes, or even having a bus bring some students to school, then go back and pick up others for the same building.

District 65 is not there yet, and Gatta is confident it will not be.

“So far, so good,” he told the Board. “There are significant headwinds ahead but we’re ready for it”