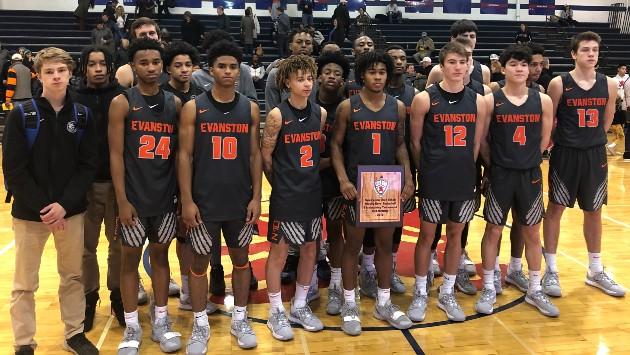 One glance during warmups Saturday afternoon told Daeshawn Hemphill that some of his former teammates at Niles Notre Dame were in the gym on a scouting mission.

Hemphill didn’t pay much attention to his old teammates. He was too busy helping deliver a championship for his new team.

In only his fourth game in an Evanston uniform, Hemphill tallied a game-high 21 points as Evanston earned its second straight championship at the Saint Viator Thanksgiving Classic round-robin tournament.

Coach Mike Ellis’ team found different ways to win in every tournament game and relied on Hemphill’s 8 points in the fourth quarter to hold off the host team for a 59-51 triumph. Evanston improved to 4-0 on the season.

Hemphill’s transfer from Notre Dame back to his hometown in August came too late to help the Wildkit football team. The Wildkits could have used the 6-foot, 180-pound junior at running back, but he practiced twice for the Dons in the preseason before his family made a move and wasn’t eligible under Illinois High School Association rules.

But he’s already made an impact on the basketball court with double figure performances in three of Evanston’s four victories. And his production on the court impressed his new teammates, even the guys he knew growing up like classmate Itchy Holden.

While the Wildkits waited to meet in a classroom following their postgame celebration, Hemphill was mobbed by his teammates and Holden asked “Did you miss a shot this whole tournament?”

For the record, he did. But he averaged 14 points per game, played physical defense and has fit in well so far.

“It was difficult for me not to be able to play football, because I really love football,” said Hemphill. “But these guys have really welcomed me to the team. They’re always encouraging me and pushing me to get better in practice. They always get me good shots and that shows that they trust me. I grew up with most of them and things have just clicked for us as a team.

“Things weren’t bad at Notre Dame (he was a reserve for the Dons last season) and I don’t regret having gone there. I just felt that this (Evanston) was the place for me to be.”

“I’m genuinely excited tonight for Daeshawn,” said Evanston head coach Mike Ellis. “I really didn’t know what to expect from him this year. What he’s done is taken advantage of his opportunities.

“He’s very level-headed and very consistent, and he’s an unselfish player. Those are the guys that get rewarded in this game. He’s been one of our more consistent players in practice. He’s learned all of his assignments and he knows where to be when he’s on the floor.”

“We really didn’t play four (good) quarters in any of the four games,” Ellis pointed out. “But we learned how to hang onto a lead, and we learned how to get a lead back when we needed to this week. We learned a lot about winning.”

St. Viator cut the deficit to 46-40 with 5 minutes, 29 seconds remaining on a pair of free throws by Connor Benson (17 points). But Hemphill responded with a 16-foot jumper, then traded 3-point baskets with Lions’ star Connor Kuchera (17 points) to help keep the visitors from grabbing the momentum.

St. Viator’s last gasp came with 33 seconds left — down 55-51 — but Hemphill’s layup on a pass from Rashawn Bost, and Bost’s subsequent steal for a layup, sealed the deal.

In four games to date, Hemphill has converted 8-of-11 long distance shots on a team that needed another 3-point threat following the graduation last spring of guards Jaheim Holden, Lance Jones and Ryan Bost.

“During the summer I worked a lot on little things,” said the newest Wildkit. “I worked a lot on my shot, to be better at catching and shooting. I have to give my teammates because they’re setting screens for me and getting me open looks. So I’m rewarding them by knocking down shots!”

Ellis knows the Wildkits will face tougher competition — beginning next week against Glenbrook North and Notre Dame — but was happy with the progress his squad made during the week.

“We proved that when we play with 5 guys as one unit, that’s when we’re at our strongest,” he said. “It really seemed to me that we played better as the tournament went along. The No. 1 thing for me is that we’re getting better.”