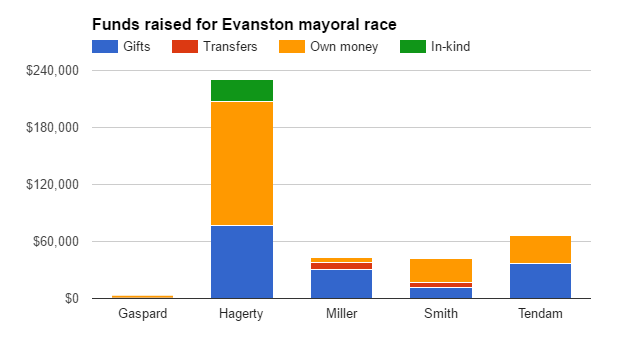 New campaign finance reports from Evanston’s mayoral candidates filed with the state board of elections show just how much money went into this year’s campaign.

Total funds raised ranged from $230,262 for Hagerty’s winning campaign, to a low of $3,357 for the fifth-place finisher in the mayoral primary, Gary Gaspard. 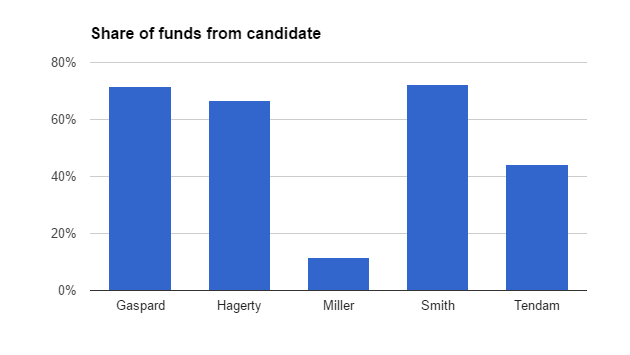 The candidate’s-own-funds calculation for Hagerty includes in-kind contributions from the business he owns and for Smith they include transfers from a committee he formed for a prior election campaign.

Smith treated money he gave to his own campaign as a contribution. The other candidates treated their money as loans, so there’s at least a remote possibility they might be at least partially repaid from future campaign contributions for others.

Except for Mark Tendam, who finished second in the primary and came within one percentage point of the winner in the general election, the candidates reported that as of March 31, they had spent almost all the money they’d raised. Tendam reported having $9,412.44 on hand, Smith reported $4,517. Miller said he had $2391.43 left over. Hagerty reported just $587.28 in cash. Gaspard said he had a zero balance.

The candidates have to report contributions or loans of $1,000 or more within two days after they’re received. Hagerty has reported loaning his campaign $17,000 since the first quarter ended and Tendam reported loaning his campaign $2,000 just before the April 4 election. Those amounts are included in the funds raised totals, but aren’t reflected in the March 31 cash on hand numbers.

If you’re so inclined, you can dig into the reports yourself on the Illinois Board of Elections website.