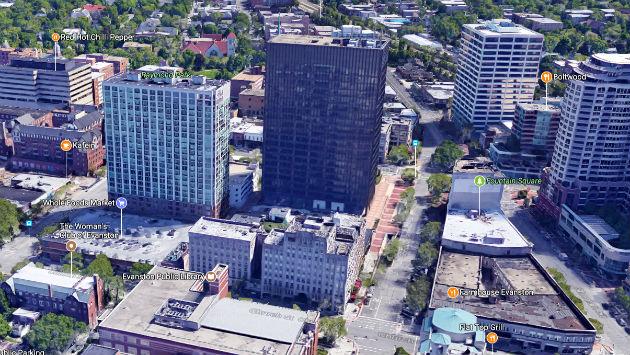 Residents fighting to shrink the height of downtown buildings are part of a long tradition in Evanston.

Albion Residential sliced a floor off its plans for a now 15-story building at 1450-1508 Sherman Ave. to win preliminary City Council backing for the project this week.

But its hardly the first time building plans have had to be sliced to win approval here.

Step into the time machine, go back nearly a century and see what happened when developer Victor Carlson proposed a medical office building at 636 Church St. 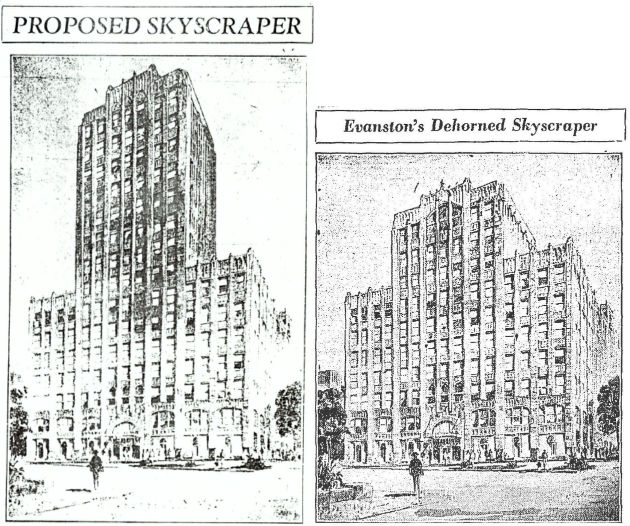 On the left is a rendering of the 15-story tower Carlson proposed, as seen in the June 16, 1925, Evanston News-Index.

On the right, the ten-story tower the June 21, 1925, Chicago Tribune said the City Council had agreed to let him build — but only if the tower portion was limited for use “only for tanks, a gymnasium, etc.”

By the time the building was completed, it had lost another floor — with the central tower, if you can call it that, rising only two stories above the seven-story base. If you’ve been in the Carlson Building, you may have noticed that its elevators only go to the seventh floor.

It took more than four decades before Evanston aldermen got up the nerve to significantly break through that height limit and approve the 20-story 1603 Orrington tower, at the other end of the block, which was completed in 1969.

Born in Evanston, Carlson had a long career, developing several other major downtown Evanston buildings, including the Library Plaza Hotel, the Orrington Hotel and the John Evans Apartments, before the 1929 stock market crash. After falling into bankruptcy in the early 1930s, he returned to build single family homes starting later that decade.

He also, in the 1960s, proposed building high-rise apartments on the site of the city-owned surface parking lot on the east side of Chicago Avenue between Church and Clark streets — a concept later realized by others as the Evanston Place apartments and Church Street garage.

As is, the Carlson Building and its annex paid just over $250,000 in property taxes this year. So we’re left with questions:

Would we be better off now with the extra tax revenue the taller version of the building might still be generating?