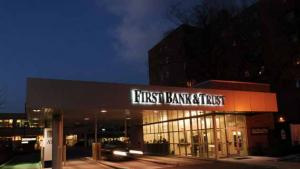 First Evanston Bancorp, Inc., the parent company of First Bank & Trust, reported a 5.5 percent increase in net income for the first half of 2013, compared with the same period a year ago, abetted by increased loan demand and usage in the second quarter of the year.

“Earnings for the second quarter were better than expected and helped improve overall results in the first half, “declared Robert R. Yohanan, managing director and chief executive officer of the locally owned and operated financial institution, in a letter to stockholders.

All three major indices of bank growth—loans, deposits, and total assets—were higher on June 30 than they were 12 months earlier.

The bank’s ratio of loans to deposits, a key indicator of profit potential, increased to 77.8 percent from 72.5 percent a year ago.

“Competition for good business loans continues to be very keen with low rates and decreasing credit standards being offered by banks across the board,” Yohanan said.  “While we have been competitive on the interest rate side,” he insisted, “we have not compromised our lending standards.”

The CEO noted that the bank focuses on lending to small to medium sized companies and not-for-profit organizations, “and the quality of our loan portfolio is paramount to the success of the bank.”

In other news of interest to stockholders, Yohanan said that the bank has retained its Green 3-Star Rating from Veribank as of June 30 and that its branch at Dempster Street and Crawford Avenue  has been awarded the environmentally friendly Gold LEED Certification, “which makes it one of the few branch banks in the country with this designation,” he said.