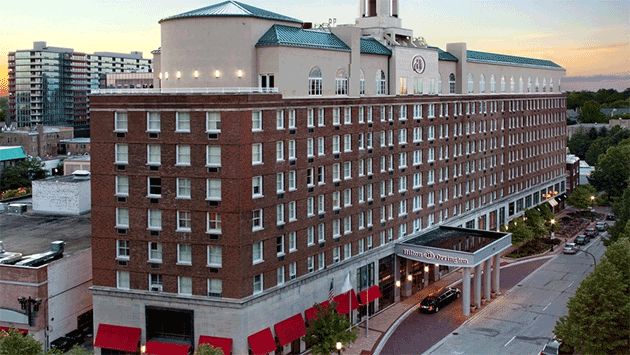 Officials of The Dow Hotel Company today announced completion of the $8.6 million renovation of the 269-room Hilton Orrington Hotel in Evanston.

The hotel is owned by a joint venture of Dow and The Carlyle Group’s Carlyle Realty Partners VI and is operated by Dow.

“The Hilton Orrington/Evanston has been a part of the fabric of Evanston for decades, hosting countless business meetings, proms, receptions and parties celebrating all of life’s milestones,” said Murray L. Dow II, DHC founder and president. “The concept behind the renovation of this historic hotel was to incorporate details of its illustrious past with the current needs and desires of today’s business and leisure travelers.”

All guest rooms and baths were completely renovated, including new carpeting, televisions, furniture, lighting, beds, bedding, showers and tiling. The hotel’s 12,000-square-foot conference center, as well as its additional 20,000 square feet of meeting space which includes the famous Grand Orrington Ballroom, were upgraded with new furniture, art and carpeting.

Located at 1710 Orrington Ave., the Hilton Orrington/Evanston is situated just north of Chicago in the North Shore district. The hotel is near such attractions as Northwestern University, Chicago Botanical Gardens, Baha’i Temple, the Grosse Point Lighthouse and the Westfield Old Orchard Shopping Mall.

Founded in 1997, Seattle-based The Dow Hotel Company is an owner/investor and operator of 10 hotel properties throughout the United States and also operates a variety of food and beverage facilities.