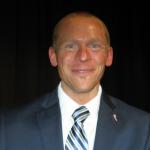 He told his audience that he began teaching music to all grades, from kindergarten through high school.

Next, he became principal of an elementary school, then principal of a high school, and then superintendent in downstate Amboy, Ill.

Shepherd has been the superintendent in Skokie/Morton Grove for the past four years, having taken over at a time when test scores were sliding and finances were perilous, he said.

Four years later, he says, students in his district have seen remarkable gains in proficiency levels and the district has met its five-year financial goal for building up its financial reserves.

The financing of public schools in Cook County is out of balance, he says, as there is a tax cap on local revenues determined by the cost-of-living index, while expenses are under no such limits.

The upshot is that when the economy improves, there is a two-year lag before revenues begin to catch up with soaring expenses.

In that case, he says, he holds “conversations” with his unions to enlist their cooperation in riding out financial difficulties. He cautioned, however, that what works in District 69 is not necessarily going to work in District 65.

Shepherd was the fourth of the five finalists for the position held until last August by Hardy Murphy, who resigned suddenly.

Friday night’s presenter will be Marty Smith, assistant superintendent of the Cluster 1 schools in the Fairfax County, Va., Public Schools.

He is working on his doctorate in education leadership and policy studies from Virginia Tech.

Under his direction are 22,000 students in three high schools, three middle schools, and 16 elementary schools in Herndon, Langley, and McLean, Va.

Smith describes  himself as a “collaborative and visionary leader with 20 years of educational experience, including classroom teacher, principal, and assistant superintendent.”