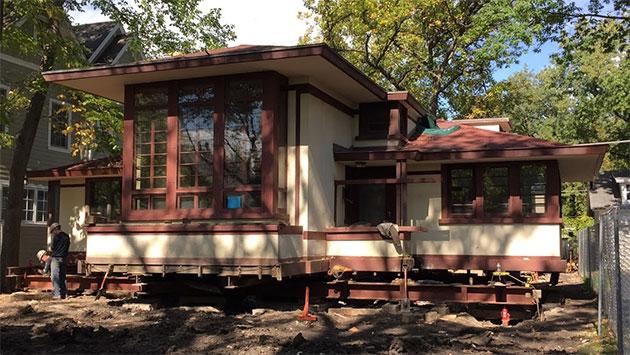 Starting tomorrow a architecturally significant home in Wilmette will begin a complicated move to a new site in Evanston.

The historic John Van Bergen Irving House, now located at 1318 Isabella Road. in Wilmette, is being moved to a property at Glenview Road and Crawford Avenue in the far northwest corner of Evanston.

But first it will be temporarily stored in the parking lot of the future Whole Foods store at Isabella Street and Green Bay Road until the new permanent site in Evanston is ready.

The preservation project was triggered after Landmarks Illinois identified the home as an important and threatened historic structure.

Built in 1928, the house was designed by John Van Bergen, who worked in the office of Frank Lloyd Wright and served as a notable Prairie School designer, for Wilmette resident James Irving.

The house is now divided into three sections, which will be moved individually by truck. The move to the Whole Foods lot will take place tomorrow between 9 a.m. and 7 p.m.

A no parking zone will be enforced on both sides of Isabella Street, between Ewing Avenue and Green Bay Road from 7 a.m. to 7 p.m.

A police escort will be present and traffic will be rerouted while the house is transported. City officials are urging commuters use extreme caution, as the structure will take up much of the street and workers will be present.

The developer who purchased the John Van Bergen Irving House hopes to build a new home on the Wilmette lot, but allowed time to remove the historic home so that it could be properly preserved.

Once the project is completed and the house is in its new Evanston location, owner Chris Enck plans to obtain landmark status for the relocated building.