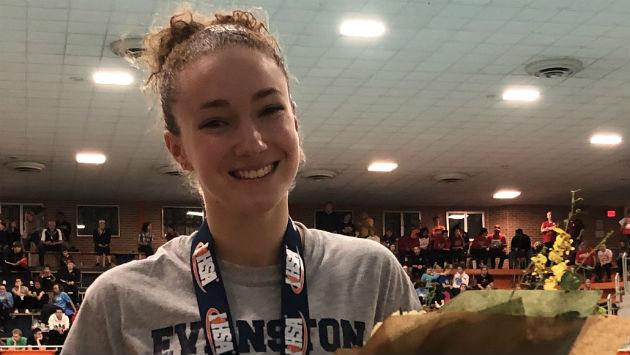 Don’t be surprised if Hogan and Foss end up as text buddies now. They’re both members of a pretty exclusive club.

Hogan joined Foss as the only Wildkit divers to earn state championships Saturday, piling up 450.90 points and pulling away from a talented field to cap a perfect senior season for the Evanston standout.

Top 12 finishes by both Hogan and Otwell, and the 200-yard and 400-yard freestyle relay teams, powered the Wildkits to a 10th place finish in the team standings with 36 points. Neuqua Valley snapped Rosary’s three-year tenure at the top with a winning point total of 185-169 over the Beads at the Burton Aquatic Center.

Hogan’s final 3 dives included an award of 9.0 from one judge on her inward dive on the second attempt Saturday. Hogan was able to actually extend her margin of victory, from 29 points after Friday’s first 8 dives, to a whopping 32 points over runnerup Allison Landis of Vernon Hills (418.10).

She broke through to claim the crown after state runnerup finishes as both a freshman and a sophomore. Only Foss, a three-time diving titlist beginning back in 1978, has won gold medals previously for the Wildkits.

The University of Michigan recruit has taken down just about every record Foss set during her heyday at ETHS, but was still impressed when she heard from the former Evanston great.

“Coach Blick (retired ETHS diving coach Jim Blickenstaff) asked me if I’d gotten any good texts lately, so I knew he had something to do with her getting in touch with me,” Hogan explained. “I saw her name on the (record) board a lot when I came in as a freshman, and it was super cool to hear from her like that.

“It feels really great to win the state championship. To come back (after skipping her junior year of high school competition) and finally win it was super exciting. I felt a lot of pressure coming into this weekend and my first 5 dives (on Friday) were a little shaky. I felt like all these people were counting on me here, and I couldn’t let them down.

“My freshman year (at State), I didn’t know what high school diving was all about. My sophomore year I dove my heart out and it didn’t turn out the way I wanted it to. This year I was way more determined because of that. I knew this was my year to get it.”

Hogan’s determination — not to mention her talent — are what set her apart from the pack, according to diving coach Aaron Melnick. Melnick used the word “ruthless” to describe the killer instinct employed by his red-headed star — and meant it as a compliment.

“Lucy is ruthless, and that’s what you’ve got to be at her level,” Melnick pointed out. “It’s not that she’s being mean to people. You want to make people catch you (in the point standings), and she doesn’t give them a window to do that. She has more of a killer instinct than anyone I’ve ever coached. She does not want someone to catch her — ever.

“She was really nervous going into the finals today, but when she started smiling after the warmups, I knew she was OK. This was the top field of divers I’ve seen in years and she had to earn the championship. She stepped up and she won it. That inward dive was the best dive of the meet over the last two days. How many other people got 9s?”

“I hope Coach meant that in a good way,” she smiled. “I know I’m super competitive and that’s the thing that drives me to get better. I want to win, and I’ll do everything I can to win. I won’t take 2nd place for an answer, and I think that’s why I’m so good.

“Today I was hoping to hit my last dive (a reverse 1.5 somersault, 1.5 twists free) a little. At that point I was super excited and I think my nerves got to me a little. I couldn’t feel my legs and I messed up my hurdle because of that. But I’m still really happy with the way I finished.”

Otwell placed 11th with a score of 383.95 in only her second year competing in the sport. Already an accomplished gymnast, she admitted Saturday that she spent last summer focusing on gymnastics and only hit the diving board for off-season practices a couple of times a week.

That might change going forward for the ETHS junior.

“Diving was my lowest priority over the summer. I didn’t have an intense practice schedule and I didn’t have any competitions,” she said. “But my goal during the season was to keep improving, and I think I did that. And I’m really happy with the way the season ended. Now I think I’ll be more serious about diving and pursue some summer training, and maybe amp it up a little bit more.

“I wasn’t really nervous today because all three of my dives had low DDs (degree of difficulty) and I knew I could hit those. It’s been great for me sharing the same (practice) board with Lucy this year. She could answer almost any question I had, and it was almost like having a second coach. It was also really inspiring because she helped me improve, even though I knew I really couldn’t keep up with her.”

Only once before in program history, when Kathy Arndt and Debbie Wirth did it in 1985, have two ETHS divers reached the finals in the same state meet.

“We knew these 2 divers had the talent. We just tried to find a way to get them comfortable and control what you can control,” added Melnick. “Jamie came from nothing (no previous experience). We just saw what she was capable of doing, and pushed her to the next step.”

Head coach Kevin Auger could point to a happy ending for the 200 relay (7th place) and 400 relay (11th place), especially considering that Cassie Tingley and Hallie Seed were the only seniors competing in either of those races for the Kits Saturday.

Tingley teamed up with sophomore Mackenzie Tucker, freshman Lily Consiglio and sophomore Erin Long to win the consolation heat in the 200 freestyle in 1 minute, 35.88 seconds, a few ticks quicker than the 1:35.97 clocking they posted during Friday’s prelims.

In the 400 relay, the team of Tingley, Tucker, Long and Seed turned in a solid time of 3:31.87, just off the school record they set at the sectional meet.

“This meet is a lot more about places than times, and those two relays were awesome!” exclaimed Auger after the Wildkit girls scored a top 10 state team finish for the 8th time since he took over the program. “Winning that consolation heat was a tremendous highlight for our season. I guarantee you that no one thought we do something like that at the start of the year.

“There’s a huge mental aspect to swimming and the girls got excited again today no matter what happened yesterday. It takes a tremendous mindset to be able to compete at a high level like this for 3 weeks in a row, and I’m really proud of how they got up and swam at the end.”