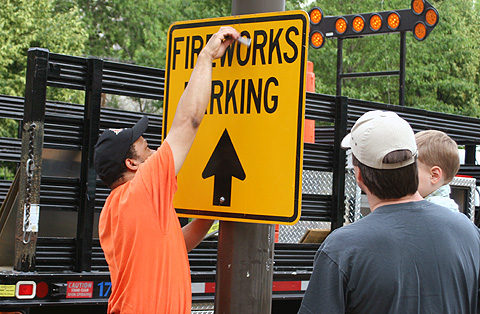 A traffic department worker drew an audience at Church Street and Benson Avenue this morning as he put up signs directing motorists to parking for the Fourth of July fireworks display.

Evanstonians this weekend are getting ready for the Fourth of July holiday.

Along Central Street in north Evanston residents were free to start putting out chairs and blankets in the parkway starting at 6 a.m. this morning in preparation for the parade at 2 p.m. on the Fourth.

And downtown, workers were putting up signs barring parking on some streets near the lakefront and directing people to city parking garages and other locations where parking for the 7:30 p.m. band concert and 9:15 p.m. fireworks display.