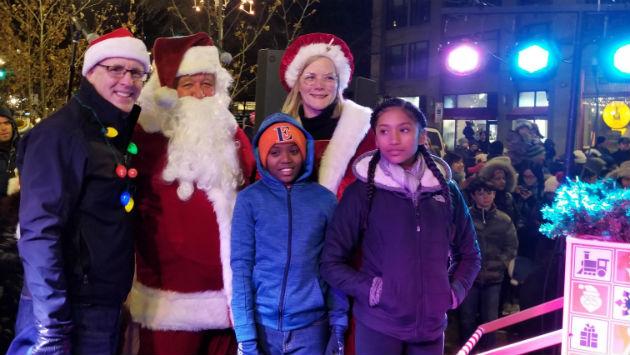 Hundreds of Evanstonians gathered in the newly-redesigned Fountain Square this evening for the annual lighting of the city’s holiday tree.

Kids who got to ride on their parents’ shoulders had the best view of the event, which moved to the south side of the square, from its traditional location just north of Davis Street.

Mayor Steve Hagerty, who used the new Sheridan Road bike lane to ride to the event, told the crowd he was thankful for the completion of the bike lane, and the Fountain Square project this year.

The kids reaching to throw the switch.

And the tree is lit.

At the new location the city now has a live tree to decorate each year, rather than having to haul in a cut tree and anchor it to a fountain pool, as was done at the old square since the previous redesign in 1976.

People who turned out for the event got to sample hot chocolate and coffee from the newly opened Colectivo Coffee shop, listen to carols from the Evanston Children’s Choir, watch an ice sculpting demonstration and meet Santa at Pete Miller’s restaurant on the square.