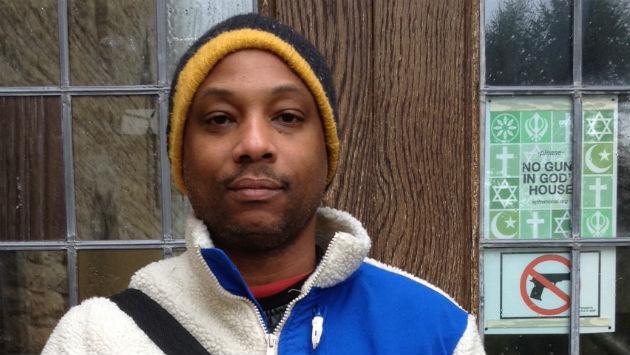 From the Hospitality Center at St. Mark's Church in Evanston, Irwin Rolle is playing it one move at a time: education, job, the clean-up of his record and the remaking of his family.

With just a trace of an accent from his native Jamaica, Rolle says, “I used to see the homeless walking with their plastic bags. I never thought that would be me.”

Rolle’s mother Josephine left Jamaica when he was 4 after settling him and his sister with a guardian. At age 8, he was working six hours a day in the guardian’s home-based leather business. “They told me, ‘Your mother’s not sending any money, so you have to work to eat.’ I put a sheen on 200 skins a day.”

His mother visited when he was 14 and cried to see how he was treated. She called him by his nickname: “Bunny, they’re not taking care of you!” Soon he joined her in Evanston. She wanted to live close to family in Chicago’s Juneway area, but she didn’t judge the neighborhood safe. Evanston was the nearest safe place.

But Rolle and his mother had conflicts living together. He moved out, worked various jobs and started a family.

After his mother died, he moved to Hartford, Conn., where he was homeless for the first time. Through the Hartford Jobs Funnel, he began an apprenticeship with a floor installation. The owner favored American blacks like himself, Rolle says, so he and the other foreign-born workers quit the program.

On his way to pick up his last paycheck from a different job, Rolle noticed his car had a flat tire. As he sat thinking in his disabled car, a squad car rolled up the one-way street. The officer asked him to get out of the car because Judge Scheinblum was looking for him. At the police barracks, they told Rolle to sign a document or they would have problem. “I should have said, if you want to beat me up, go ahead. I should not have signed.” At the hearing, he entered an Alford guilty plea, asserting his innocence and securing his freedom. But the effects still last: “Employers don’t like to see a criminal record.”

Rolle has shuttled between Hartford and Evanston, and has been homeless in both places. He has lived with friends in Des Plaines while working at Avon, a job he found through Hilda’s Place, and at Chicago’s Pacific Garden Mission while searching for work here.

On the phone at the Hospitality Center at St. Mark’s, he works with legal aid to have the arrest episode expunged. “When they discharged me, they read the arrest report and kissed their teeth.” He makes the kissy sound of disdain that’s common in Jamaica. “They knew it was a mix-up.”

Rolle carries a neat blue bag. He’s careful not to appear homeless as he works his plan. In Hartford he earned his GED, and he recently restored his Illinois driver’s license. “Fifteen years ago, one wrong move sent me the wrong way. Now every day I have a list. It’s like a chess game.”

This is the third in a series of profiles of homeless people in Evanston. Rick Kinnebrew, formerly with the Evanston Public Library, is a volunteer with Interfaith Action, which supports people who are homeless and hungry in and around Evanston and operates the Hospitality Center at St. Mark's.