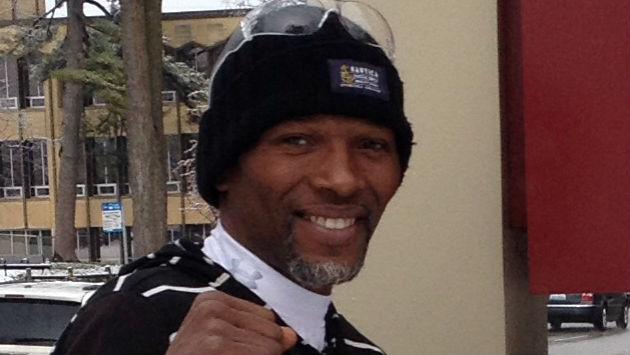 About 400 people a year visit the Hospitality Center for the Homeless at St. Mark's Church in Evanston for temporary shelter, food, and job counseling.

One of them is Tonny Mercer, a young-looking grandfather who grew up in public housing in Baltimore.

“Did you ever watch The Wire? That’s where I grew up," Mercer says. "In the Murphy Homes, which everybody called The Murder Homes.”

Mercer is outgoing and good-looking, with some white hairs in his small beard. He walks fast, talks fast, and keeps himself fit. After twelve years of study with Baltimore’s karate master Sylvester ‘Ironman’ Cash, he earned a black belt. “I was his number one student,” he says.

He doesn’t want to go back to Baltimore, though he misses seeing his two grown daughters. Again and again he has invited them to come visit, telling them about the beaches, the free festivals, the lakefront that feels like Baltimore harbor. They have never made the trip to see him.

Since 2008, Mercer has tried to put together a job and a home in the Chicago area. He spent some time living with friends, but “that always ends, and it’s just taking.” Soon he was living at the Pacific Garden Mission. When they relocated from State Street to Canal, he helped them move. “Anywhere I go, I fit in. I go everywhere. I pray my God, and I go.”

He remembers watching a homeless man cursing out a worker at a shelter, expecting the situation to escalate. “The guy just let it roll off him. The power of silence.” At some shelters, he said, you have to sleep with one eye open to keep from getting robbed. “With troublesome people I meet, I show them no disrespect. I just walk away.”

He came to Evanston looking for Hilda’s Place. He got frustrated when he couldn’t find it. There was no sign. Finally he asked a man stepping off the bus who said he was standing right in front of the place.

“Right away I got a hat, gloves, and a coat. They let you pick it out, so it’s not something you would never wear.” Mercer can recall everyone who’s helped him, like Ward Collins and Ayanna Brown, both from Connections for the Homeless. He speaks expressively of the helpers he has met in Evanston. He says Interfaith Action’s Sue Murphy is a beautiful spirit, and calls his job counselor at the Hospitality Center, Charlene Parris, warm, non-judgmental, and always in your corner.

When Mercer filled out the job application at Found Kitchen, he expected the usual brush-off. But his job counselor had prepared the way, so they asked him to start immediately. “It was great! Chef Nicole was so friendly to me. Everybody was. Not like other bosses who always have their eye on you because of this.“ He tapped the brown skin of his arm. “And the food there, so good!”

He worked in the kitchen, but lasted only a few months. Every night, he says, he got off work after midnight, after the Purple Line trains had stopped running.

To catch a train to his temporary place in Chicago, he had to walk the two miles to the Howard Station. He was hot from finishing work, then shivering on the walk, then overheated on the train, where he would sit exhausted with his jacket and shirt open to cool down. His health got so bad that he resigned. With a late-night train or a cheap place to live in Evanston, things would have been different.

“I’d be glad to work in a restaurant again. But I’d work anywhere. I’d work on the moon.”

This is the first in a series of profiles of homeless people in Evanston. Rick Kinnebrew, formerly with the Evanston Public Library, is a volunteer with Interfaith Action, which supports people who are homeless and hungry in and around Evanston and operates the Hospitality Center at St. Mark's.