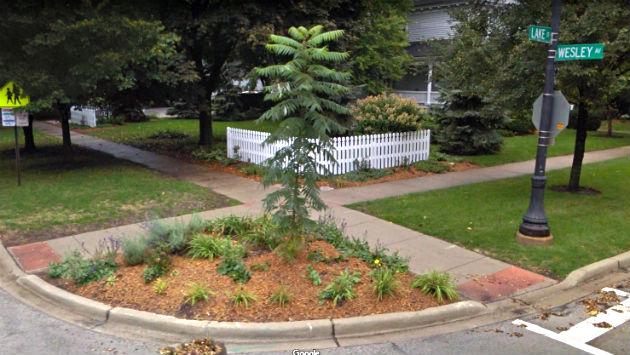 If you want to plant anything but lawn grass in the public parkway outside your home you’ll need to get a permit from the city under an ordinance scheduled to be discussed by aldermen Monday.

And don’t even think about attaching a swing to a parkway tree — that will be completely banned.

A swing attached to a parkway tree near Dewey School. (Google Maps)

The proposed ordinance would bar planting:

And it would require a permit to plant any trees, shrubs, perennials, annuals or ornamental grasses in the parkway — but at least the permit would be “issued free of charge.” You’d also have to hire a certified arborist to plant a tree.

It would also bar “attachments of any kind” — including swings, hammocks, signs, tight ropes, bird feeders or brackets — to any city-owned tree or shrub.

In a memo to aldermen, Public Works Director Dave Stoneback says staff has seen an increase in such attachments recently and that they can not only damage the trees, but in some cases may present a hazard to pedestrians, especially at night.