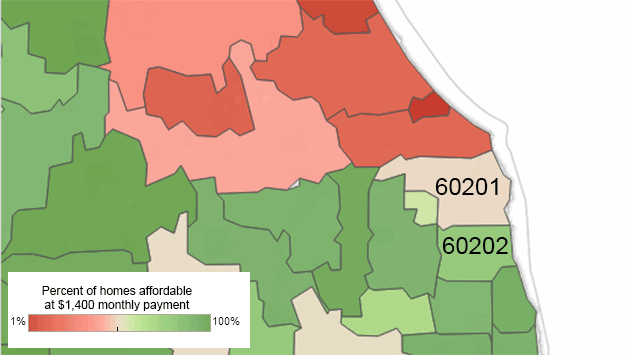 A new study by the real estate firm Zillow suggests homes in Evanston — and throughout the Chicago metro area — are more affordable now than they were before last decade's real estate bubble began.

The report compares median home prices and median incomes from the period 1985 to 2000 to current prices and incomes.

It says that in the earlier period Chicago area residents with the median household income would have had to spend 23 percent of it on principal and interest payments for the median-priced home.

As of the fourth quarter of 2013, with the Chicago area median income at $61,434 and the median metro area home price at $177,300 and an interest rate of 4.3 percent on a 30-year fixed rate mortgage, the cost, assuming a 20 percent downpayment, would have been about $700 a month, or 14 percent of median income — nine percentage points less.

Home prices in Evanston, and the rest of the North Shore, are higher than those for the metro area as a whole, but have tended to follow the regional trends over time.

Zillow says that the median price of a home on the market now in the north Evanston 60201 zip code is about $353.000. It says that would require a monthly mortgage payment at current rates of $1,400 — or 27 percent of the median income for Chicago area residents.

And for south Evanston zip code 60202, the median home price now is about $240,000. That would require a monthly mortgage payment at current rates of about $950 — or about 19 percent of the median income for Chicago area residents.

The federal government has traditionally considered housing affordable to a family if it costs less than 30 percent of income — but the government includes property taxes and insurance in that calcuation — two items excluded from the Zillow figures.

Zillow's report notes that rising home prices and mortgage interest rates have somewhat eroded housing affordability as the country recovers from the housing bust that followed the bubble.

And it says that some areas, especially on the West Coast, have begun to look unaffordable compared to their historic norms.