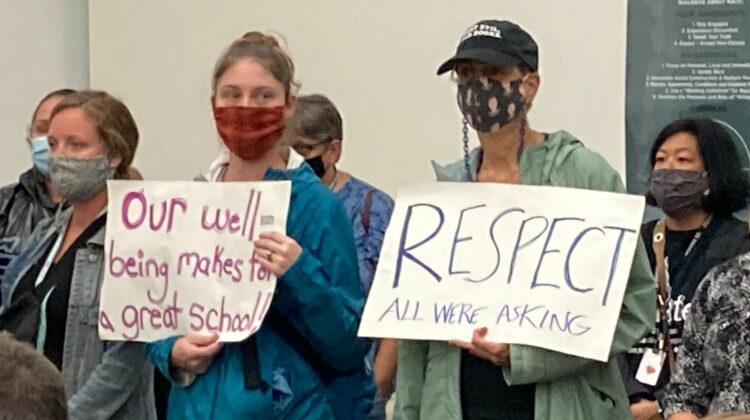 Teachers turned out at a District 65 board meeting to protest working conditions.

The dispute between the teachers’ union and the administration in Evanston/Skokie School District 65 has now seen a salvo from the superintendent.

In response to union charges Monday of a “toxic work environment” and “power hungry administrators,” Superintendent Devon Horton strongly defended what his team is trying to implement, saying Thursday “We have a window of opportunity here, with the pandemic as a catalyst, to redesign and organize so that we can lead systemic change that will help result in better outcomes for our students.”

One of Horton’s major themes since becoming superintendent is equity, and decreasing what he terms “catastrophic differences” in academic performance among various racial, disability, and socioeconomic groups.

“Only a few districts have boldly stepped up to take on this fight,” Horton says in an eight-page statement on the District 65 website, “but even fewer have built a foundation to take action.”

“I am proud,” he adds, “that District 65 is at the forefront of the fight for equitable education for all students.”

Horton disputes statements from District Educators Council president Maria Barroso that the district is trying to “micromanage” teachers with a “massive amount of paperwork” and required follow-ups which are “a waste of time and energy.”

He says new procedures have been thoughtfully researched and planned following a review by a respected curriculum consultant.

“It is disingenuous to claim that one believes in equity, but then refuse to identify and shift one’s actions to bring about this change,” Horton says.

Change is not easy, Horton adds, but “The processes that DEC leadership have publicly expressed concerns about are all a part of our efforts to disrupt system racism that has prevented positive outcomes for all students.”

The superintendent also denies the allegation that teachers are forced to use a “scripted curriculum,” at the expense of their personal expertise.

Rather, he says teachers do have flexibility to change what is taught when and how, as long as the student experience is aligned to course and grade level goals, and is adapted for specific student needs.

“This practice is the opposite of micromanaging and forcing a scripted curriculum,” Horton says.

He also says the administration is reviewing a list of 12 union requests regarding expectations around lesson planning.

As for allegations of fights among students which, the union president said were “escalating and getting out of control,” Horton says district administrators have held weekly problem-solving meetings with the union, and after two sessions, “there have been no issues raised by DEC regarding student discipline and classroom culture in these meetings.”

Horton also says the district is using an anti-bullying program, and increasing the use of restorative practices (which utilizes conversation and counseling in an effort to reduce student disputes and avoid suspensions).

Horton concedes that restorative practices were not fully rolled out, and “novice educators were not all adequately trained in RP.”

He says the district is addressing this shortcoming “expeditiously.”

Horton also says he has scheduled two virtual meetings where teachers can express their concerns, and says there are periodic ongoing opportunities for union/administration conversations.

The superintendent also says a consultant had been brought in to help build a “collaborative structure” for labor relations, but that work “did not fully blossom” due to shifts in leadership and the COVID pandemic.

He says that consultant has been brought back to work with the administration, union leadership, and school board members.

“Ultimately,” he adds, “all groups are working towards one goal and that is to provide the best learning environments and opportunities for all students.”

But Horton makes it clear that in his opinion, that “best learning opportunity” requires doing things differently.

The first thing the reader sees in Horton’s statement is this: “If the efforts and actions of adults don’t change then student outcomes will remain the same.”